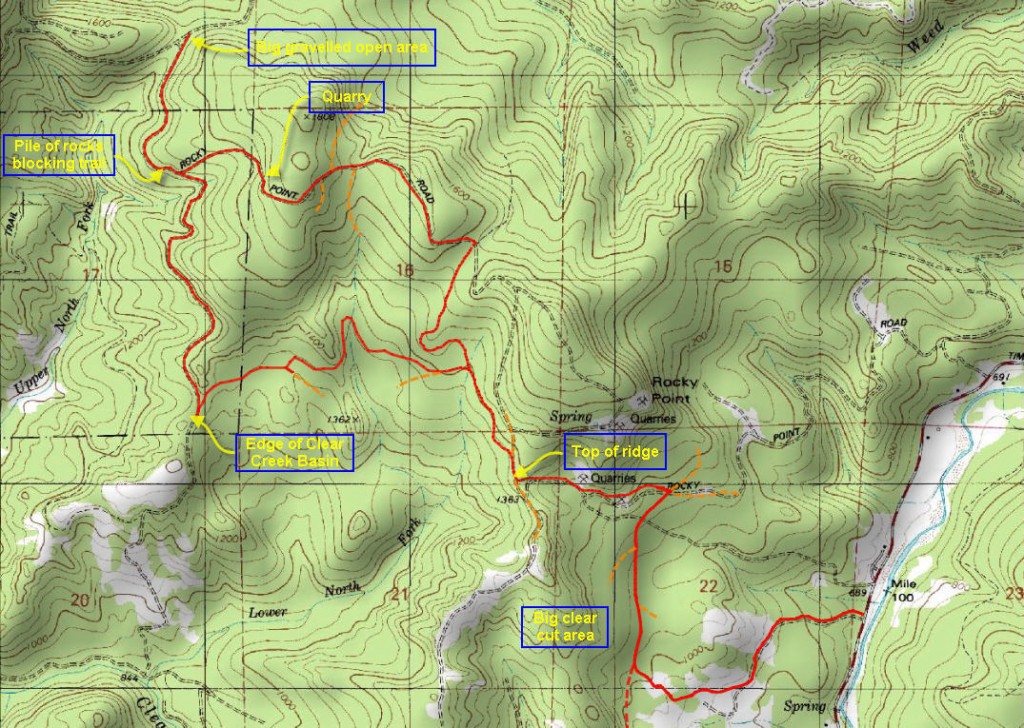 Brief summary: This trail is the first in a set of two trails that comprise the trek from the Nehalem River to Camp McGregor. This initial segment climbs up Rocky Point and meets the Eastside Grade at an intersection on the ridge line separating the Clear Creak watershed to the south from the Rock Creek watershed on the northern slope.

The subsequent segment follows the Eastside Grade west along the ridge line, and then connecting via a short bushwhack to a prior extension of the Eastside Grade it continues going west all the way to the McGregor Road which it then follows down Olsen Creek to the site of the old Camp McGregor logging camp.

Park on the verge of the Timber highway, opposite the bridge crossing the Nehalem at the 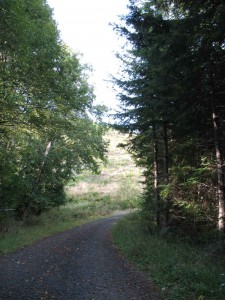 entrance to the Peterson Road Cross-over road. On the west side of the road a paved road leads upwards behind the ubiquitous blue gate – establishing it as Longview Fibre country.

This road leads upwards for .9 miles before it intersects with a bigger road that ascends from the Clear Creek Road, a mile to the south of where we started. Either access route will work, but the access from Clear Creek is 1.2 miles long to the same intersection. At the intersection turn right and follow the broad road upwards along a major clear-cut on the uphill side.  As you proceed you will pass two side spurs. 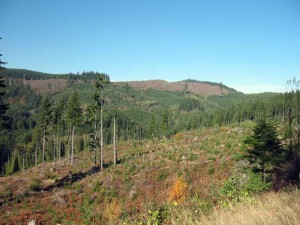 At this point we have ascended a major ridge, beyond which we enter the watershed 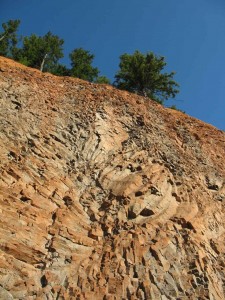 that feeds Clear Creek which drains southwards, instead of draining directly eastwards into the Nehalem River. Looking south from this ridge line we can see one track following the top of the ridge south. To the north we see the road split, with a minor spur heading up the slope to the right – we will ignore this upper route since it is overgrown and requires ascending higher than we need to reach our destination. Instead we will head north, and take the left hand option that leads along the side of the hill descending gently as it goes. We will follow this road .3 miles to the next intersection.

The next intersection provides two options: straight or a left hand turn. Either way will work, but the straight option (1.8 miles to where the 2 routes rejoin) will require ascending to a greater height before reaching the end of this trail segment. The lower option (2 miles) avoids any unnecessary elevation gain, and so we will choose this as our primary route. The first part of this route takes us 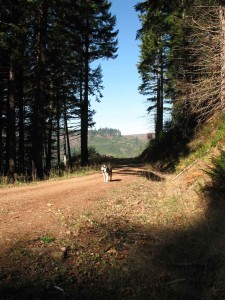 across a south facing slope, and 1.1 miles later we reach the edge of the basin that feeds into Clear Creek. This basin has been extensively clear-cut and affords a great view northwards up the valley to ridge line dominated by the Eastside Grade road. To the west one can follow the curve of the ridge that will carry the Eastside Grade to the distant slope where it meets the McGregor road.

At the lip of the clear-cut basin, our transverse road meets an older route that ascends (north-south orientation) along the edge of the clear-cut – going straight up the valley. At this point the ascending road is cut by a huge berm and a corresponding trough on the far side. 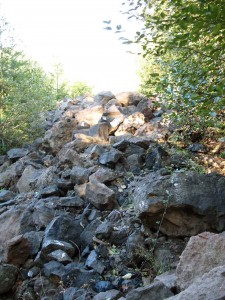 But walkers can easily ignore this impediment and begin to climb up the valley. The ascent continues for .9 miles, whereupon this route meets the Rocky Point Road (discussed earlier) coming in from the right. This is pretty much the top of the ridge, but we will take the road that heads northwest from this intersection. This road has been blocked by a barriers pile of large boulders that can be easily traversed on foot. The picture alongside is older and shows the road when it was completely filled with boulders. They have since been mostly removed.

This short trail is a half mile long and it debouches out into an open area bounded on the right by a stone quarry and on the left by an open gravel field. The stone quarry is also notable because it is one of the sites mentioned in the 1957 DOGAMI report that lists the best locations for finding the Oligocene fossil beds. Basalt is exposed at the base of the quarry , but overlying the basalt is about 15 feet of basal conglomerate of the Cowlitz formation containing many Eocene marine fossils. These are said to conatin numerous pelecypods and the occasional sharks tooth.

To the north the Eastside Grade descends the north face of the hill to meet the end of the Keasey Road (accessible from north of Vernonia). To our left, and across the flat gravel expanse, we can also see the Eastside Grade beginning to traverse the east-west orientation of the ridge line. This memorable intersection will serve as the terminus of this first segment of the trek to Camp McGregor.