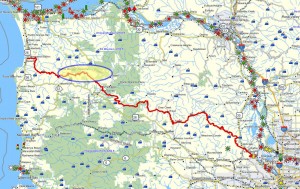 Brief Description: This is the first of two trail segments that comprise a single long hike (14.5 miles) from the Lower Nehalem up the slopes of Saddle Mountain and eventually across to the shoulder of Humbug Mountain. These two trails are about 3/4 of the way to the coast on the Northern Route. 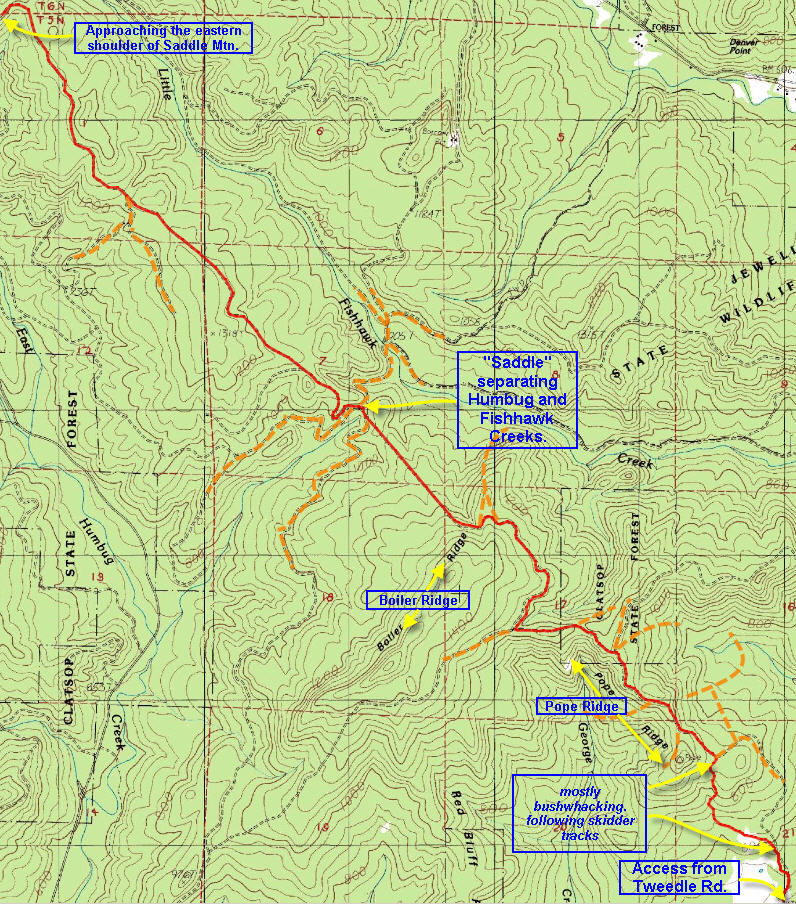 Travel time to trail head: 1 hour and 5 minutes (54 miles) from the Sylvan interchange on Highway 26 via the Jewell Junction to Tweedle Road. The hike begins alongside the road and climbs through the roadside forest up Pope Ridge.

Trail Log: The town of Vine Maple is located on Highway 103 north of the Jewell Junction on US 26. It is presumed that this small rural community was named after a post office which operated in the area for about 11 years from May 1891 to May 1902 known as Vinemaple. No doubt, its name is a reference to the abundant Vine Maple (Acer circinatum) which grows abundantly in this area as it does throughout northwestern Oregon. The original name for this area, which hosted some of the earliest settlements in the Nehalem Valley, was Mishawawka – the Clatsop name for the region.

To access the timber lands located to the west of Vinemaple, we had to cross private property because we were unable to locate a publicly accessible route up into the timber lands. Twombly Road located a quarter mile south of the bridge on Tweedle Road does penetrate this area, but it passes through private property. The entrance to the road is located a quarter of a mile south of the bridge that crosses the Nehalem. We did not try to use this access, but rather opted to slip up into the woods just past George Creek, a small creek that crosses the road a half mile south of bridge. Parking our car further down the road, we walked up past a barn and an unoccupied house into the forest directly beyond.

From there we followed the slope uphill – in a generally northerly direction. On this exploration we ended up navigating slightly to the left and following a barely discernible track used by the owner to access the interior of his wooded property. As we penetrated deeper into the forested area, we encountered occasional open areas, but mostly the forest was dominated by alders and some birch trees. We generally continued up the southern flank of George Creek and when the ravine narrowed we turned right and proceeded directly uphill in a more northerly direction. Doing this brought us to the narrow head of a gulch which we climbed and stumbled out on to a logging road. Walking a short distance to the right brought us to a 3-way intersection. Altogether the distance from Tweedle Road was .9 miles. 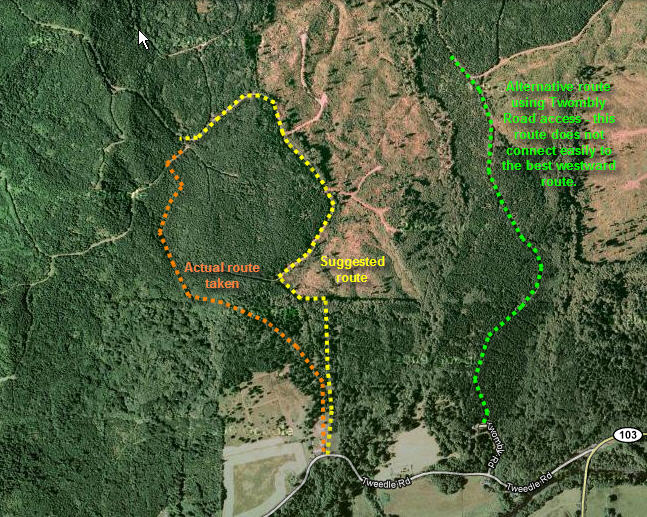 In reviewing the aerials and maps, it appears that the better route would have been to proceed into the woods from the barn and house heading directly in a northerly direction. Rather than turn left to follow the slightly raised ridge that we described above, it would be better to proceed directly northwards crossing the slight depression and thicker vegetation. Visible through the trees you should be able to discern a break in the tree line marking the edge of a clearing. Indeed, this does mark the edge of an area that was clear cut some years ago. Coming to the edge of that harvested tract, turn left and follow the edge of the tree line uphill.

At the top of the cleared area you will find a rough logging road that traverses the top of the logged slope, before turning west and climbing up 140 ft. in elevation before reaching a shoulder. On the way you pass by two logging spurs that head off to your right. At the top the road doubles back heading in a southwesterly direction and follows the level ground along the shoulder to reach the three-way intersection mentioned in the original route description above. Just before reaching the intersection you will pass another spur road leading off on your right. The three-way intersection lies at an elevation of 900 ft. 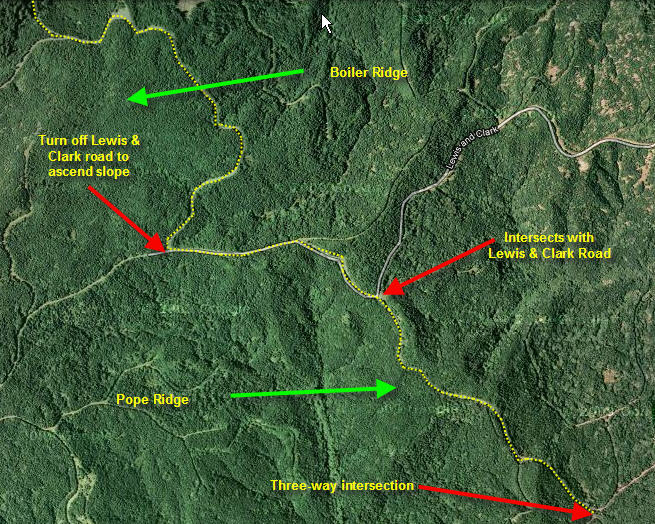 At this three-way intersection, the two alternative routes join together – the one arriving from the southwest and the other from the northeast. But both routes now enter the “third” road (in the three-way intersection) to climb .7 miles up Pope Ridge in a northwesterly direction. At that point the track intersects with the Lewis & Clark Road (which enters these forested hills from further north on Highway 103) at an elevation of 1160 ft. At this point bear left and follow the Lewis & Clark road about 2/3 of a mile, where you will encounter a road that splits off to the right and climbs up the heights on your right. Follow this road to the top of what is known as “Boiler Ridge”. At an elevation of 1300 ft. (2.7 miles from Tweedle Road) the route crests the shoulder of Boiler Ridge. Here you will enter a three-way intersection – stay left. At 2.9 miles you will want to veer to the right and follow this route down off the ridge to a saddle where a number of logging roads converge.

This saddle separates on of the tributaries of East Humbug Creek to the south of the ridge and Fish Hawk Creek to the north. About 3.6 miles into the hike, this is a great place to stop for lunch or a snack, before continuing on up into the foothills of Saddle Mountain. 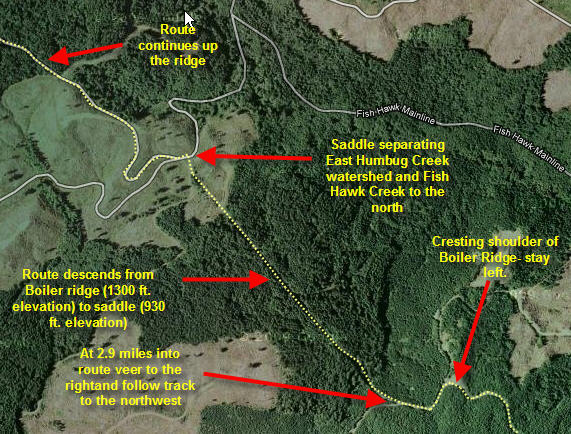 As you approach the intersection from the southeast, you will enter a four-way junction. The right hand option leads uphill and crests the saddle leading towards Fish Hawk creek. But we will stay on the southern slope of the saddle. As you approach the intersection your track will merge with another road to your left. This road slants down the slope and provides access to the southern flank of Boiler Ridge – not where we want to go! Proceed into the clearing that marks the intersection (at an elevation of about 1000 ft.). On the far side of the intersection another road slants down the southern flank of this hill. Almost immediately this road splits with one road dropping down the slope, and on the right a road that curves up and follows the ridge in a northwesterly direction. This last option is the route that we will want to take.

This trail segment begins at the end of the previous route that traces a 7.6 mile walking route from Vinemaple, located on Highway 103 alongside the Nehalem River to the paved Lewis and Clark Road that provides access to the popular peak.

In principle, the routes described on this blog have been chosen to eschew all heavily traveled roads, especially those that are paved for high volume vehicular traffic. But this short reliance on Lewis and Clark Road is an exception, since there are not real alternatives, and the portions of this route that rely on this paved route are as short as possible.

From this intersection of the Lewis and Clark Road and the logging road that approaches up the ridge from the east, the next portion of this route leads in a southwesterly direction down the paved Lewis and Clark Road. Follow the Lewis and Clark Road for .67 miles. At that point a logging road leads off to the right, climbing steeply up the southern flank of Saddle Mountain. The elevation at the base of this road (where it connects with the Lewis and Clark Road) is 1520 ft. Over the next mile this road climbs 220 ft in elevation. As the road levels off, a spur road is evident on the right, and later also to the right: a small quarry site. This ascent finally ends in a T intersection with a road running along the flank of the mountain. At the T intersection (1.47 miles from the start of this hike), turn right and follow this road as it heads west along the flank of Saddle Mountain. It skirts the top of a clear cut and then turns south and descends to intersect with another logging road 2.4 miles into the hike. The last portion of this road is lightly used and accessible only on foot, but it does come out on to a road that cuts straight through the forest and descends steeply from where our route abuts it at the upper end (1525 ft. in elevation) to its lower end at an elevation of 1260 ft. There the road turns abruptly to the left and the route becomes somewhat confused as it approaches a creek. There are several elk and footpaths that traverse this creek crossing, but suffice to say that the route continues on the far side of the creek –even though the route is not easily visible from the end of the road (2.9 miles from the start of this hike) you’ve just descended. Proceed towards the creek (1220 in elevation) and (3.25 miles into the hike) ascend the far side where the resumption of the route becomes visible again.

Follow this track down the slope, passing a spur on the right at 3.4 miles into the hike. A quarter mile onwards (3.68 miles) this track rejoins the Lewis and Clark Road. Turn right and follow this road down the Lewis and ClarkRiver valley, crossing the Lewis and ClarkRiver at 4.53 miles into this hike (elevation 1000 ft.) and later to where it joins with the Saddle Mountain Road. That junction is 5.75 miles into the hike (elevation 895 ft.); follow the Saddle Mountain Road to the left (southwards) and follow it for 1 ¾ miles to the shoulder of Humbug Mountain. At a distance of 7.5 miles (elevation 1300 ft.) look for a pull-out area on the right side of the road. In the woods behind it you should see a small footpath entering into the forest and (if you look through the stand of trees) emerging into a clear cut area beyond. This marks the beginning of the next installment of trail routes, known as the Ridge Runner’s Delight Trail – that ends the “northern route” in Seaside, Oregon.