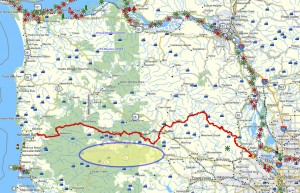 Brief Description: This path retraces the historic wagon route connecting Tillamook and the Tualatin valley. It is a lovely hike up the side of the Wilson River valley – especially cool and shady on a hot summer’s day. This trail is part of the good trail development work accomplished by the Tillamook State Forest. It lies just south of my “Southern Route”, which crosses the mountain by way of the Salmonberry River. 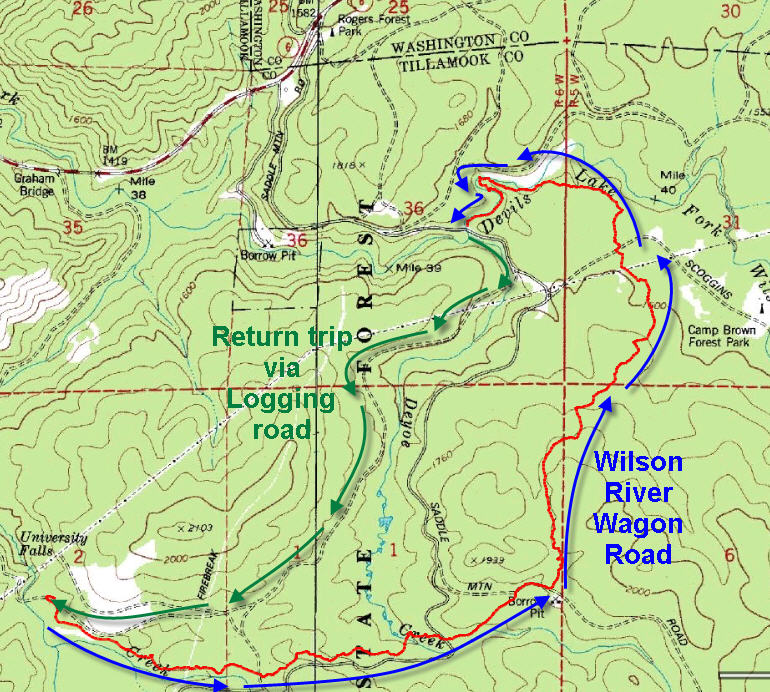 Distance: 4.5 miles one way on the trail and 2.3 miles back on the University Falls logging Road.

Travel time to trail head: 57 minutes from the Sylvan interchange on Highway 26 (40 miles)

The first attempt to open a route from Tillamook to the “outside” was launched in 1876, when three would-be road surveyors set out to blaze the best route eastward. Carrying only one gun, a compass and blankets the trio set out with their dog from Kilchis aiming to cross the divide st the head of the Wilson River Valley. They were soon lost and nearly starved to death. After surviving for two days on butter melted into coffee, even the dog was getting edgy about their hungry glances. But after nearly 9 days they finally emerged in the Willamette valley, rather worse for wear. Fourteen years later W. S. Runyon, George Runyon and Claude Thayer finally established a route into the Wilson River Valley and in 1893 they opened what came to be called the Wilson River toll road. A horse and rider paid $1.00, a wagon team set you back $3.50 and each sheep could shuffle through for only $0.12. Settlers were given free passage for non-commercial traffic, but these tolls were bitterly opposed by the locals who eventually ripped out the toll gates in 1907.  By this time the road was all but impassable. It was not until 1931 when the route was designed a state highway that the new road that we use today was built. 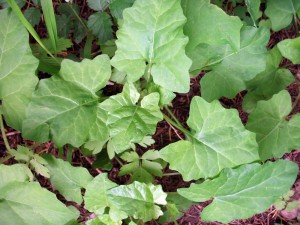 One plant that our intrepid road builders could have benefited from is the hardy Pathfinder (Adencaulon bicolor). This stout member of the sunflower family wth its distinctive arrow shaped leaf is noted for the contrasting colors of its leaves – upper side versus underside. Walk through patch of pathfinder and you’ll be be able to see where you passed from the telltale brighter color of the  underside of the leaves.

The Wilson River Wagon Road trail follows the original route of the wagon trail to the south of the current Oregon 6 state highway. I have chosen to start the route at the Deyoe Creek Trailhead which is 1.25 miles south of Roger’s Camp (located along side Oregon 6)  near the summit of the coastal divide. Hikers seeking a somewhat longer configuration can begin the hike from the Nels Rogers Trail head located at the day use area just east of of Roger’s camp (turn left where the road divides), just above the highway. 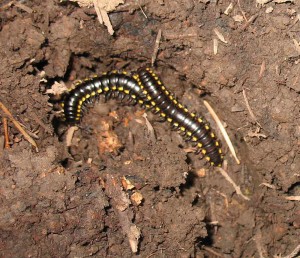 On wet days you may occasionally spot one of the common Cyanide Millepedes that are very common in our region. This blind insect feasts on damp and rotting vegetation. Don’t handle them, because they can excrete a liquid that will stain your hands, but otherwise they arenot dangerous in any way.

To get to the Deyoe Creek Trail take the Roger’s camp exit and turn right at the split in the road and then follow signs to University Falls. One and a quarter miles onward the road crosses a short concrete bridge. Pull off on the left side of the road in front of the trail head display. Walk past the display and proceed along the Deyoe Creek trail for .2 miles or until you reach the wooden bridge. Crossing the bridge and following the path will eventually lead you to the beginning of the Nels Rogers Trail at the aforementioned Day use area. But we will bear right, avoiding the bridge and entering into a dense, mossy forest that leads to the Beaver Dam Road and the end of the Nels Rogers Trail.

One of my favorite plants that grace our deep forests is the Oregon Oxalis, or Wood sorrel. This plant looks like a large three-leaf clover and is 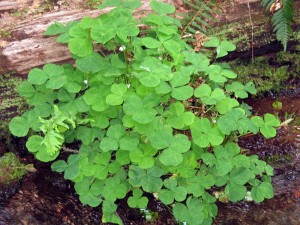 ubiquitous all across the forest floors of the Pacific Northwest.

On a busy sunny week-end the Beaver Dam Road can be overrun with swarms of dusty stormtroopers astride wailing dirt bikes and roaring ATV’s covering everything with clouds of dust. Oh, how I would love to have an Ewok tripwire to stretch across this raucous raceway.

So hurriedly, we sprint across this treacherous turnpike and reaching the entrance of the Wilson River Road Trail which begins on the other side of the road.  This trail follows a portion of the historic wagon route along the South Fork of the Wilson River. 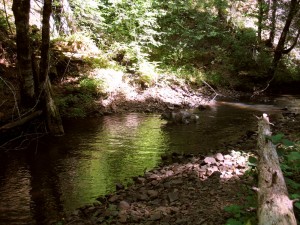 Loki taking a well deserved dip in a cool pool.

Gone are the wagons and sheep; today’s users are the mountain bikers, equestrians and hikers. The trail skirts above Brown’s  Camp – a focal point for the ATV and motocross tribes  – and crosses several motorized trails.  The din of wailing machinery, laced with target practice on semi-automatic rings through the still mountain air until you crest the ridge and quiet slowly returns as the trail descends to Old Saddle Mountain Road. Turn right onto the road and follow it north about 100 feet to where the Wilson River Wagon Road Trail continues to the left. The trail levels out and eventually it crosses two additional gravel roads before paralleling Elliott Creek. Another 1.6 miles brings you to the University Falls Road and the Gravelle Brothers Trail head.