I recently was given a treatise on “Logging Road Layout and Related Subjects” hand typed by “Bull” Durham in 1997.

Here was a candidate for the New York Times best-seller list, I thought, as I began to sort through the details of laying a tagline, but then suddenly the voice of the writer pierced through the technicalities and I was captivated.

Right on page one, he starts you off, with this choice piece of advice, “ After the office interview have the client take you to the property  and show you what he knows: roads, line crossings, line tags, mean dogs, crazy hermits, and hostile widows.”  Now that changes the proposition a bit…

But “Bull” isn’t about to go charging into the lair of any slavering dogs or pernicious widows lying in wait. “Don’t think of a project as an unfriendly foe and don’t attack it. You should caress it and surround it …sneak up on it,” he advises. “get to know the property intimately…the more you know of her secrets the more she will cooperate and the less pitfalls she’ll have for you to stumble over.”  They sometimes talk about “lonesome cowboys”, but I’ve never, until now, considered the possibility of a “lonesome logger”…making amorous advances upon his special stand of timber… 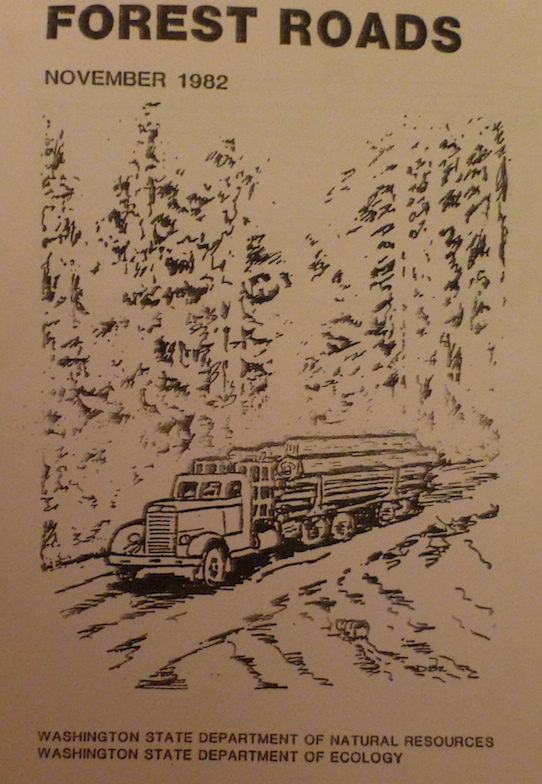 But my favorite piece of advice that Bull gives us, after his many many years in the field, is contained in his section entitled Animals to Avoid. After quickly listing off bears, elk, deer, skunks, feral dogs, rabid bats and even pot farms he warns of two particularly dangerous beasts in the forests. Would it be cougars, spiders, bees or log truck drivers?  Nope, none of those…

His first warning is about “Game Hunters (Homo Stupidus)“! He categorizes them as “unpredictable, may shoot at anything, they go a little nuts at hunting season,” he confides. “Avoid whenever possible; stay in your vehicle” he advises and as a final caution he adds, “Don’t wear bright colors to give them a target.”

But it was his final choice of fearsome and dangerous beast that really floored me. He relates a story emanating “a few years ago”  in Coos County. It seems that,

“the rigging crew on a yarding job were setting chokers down in a draw where they turned up a Salamander…some of the boys dared another to bite the head off of the Salamander. The boy took the dare, bit the head off, went into convulsions and died before anything could be done for him.”

Now there’s advice I wouldn’t have thought to include in a manual on how to build logging roads. I’m sure it avoided lots of convulsions and headless salamanders.

Love to spend time getting lost in the deep forests of the Pacific Northwest with Zoe, my Siberian Husky.
View all posts by Jim →
This entry was posted in Animal lore, Logging history, Uncategorized. Bookmark the permalink.

One Response to “Animals to Avoid”