Although I have been collecting materials about early Oregon coastal trails and paths for many years, I was pleasantly surprised to find some original historical research compiled by Robert Benson in 1981. It included this unusual map and this uniquely expansive list of significant trails.

I have presented this map and the associated list with as few editorial (italicized) additions as possible. I can’t say I know more than a handful of these putative trails, but nonetheless I publish them here in part to preserve the record, but also to see if I can conjure some of you out there to respond if you have something interesting to add to the record. Maybe we can coin a new term and call it “crowd researching”. 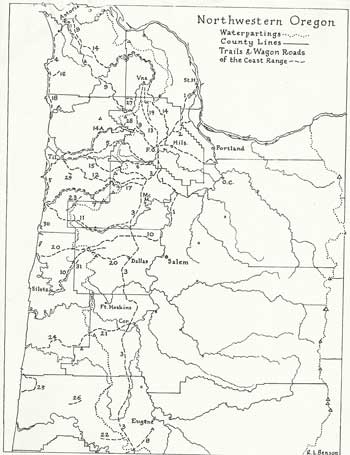 And here is his list of the various trails:

1. Jason Lee Trail, used by missionary searching for a location for his mission.

7. Nenamusa Trail, rumored in use by Tillamooks for vacations and honeymoons.

11. Cattle trail, over which herds were driven to Tillamook and Clatsop farmland.

12. Harris Trail, gave Tillamook access to civilization in all weathers.

13. Cape Horn Wagon Road, west of West Dairy Creek and on to Vernonia.

Major Hiking Routes, now usable at least in part (in 1981, when this list was compiled)

17. Big Nestucca logging road, unsafe but favored by bicyclists and hikers to the coast.

18. Oregon Coast Trail, planned throughout; officially open at the north end (much more since this was published).

21. Corvallis-Coast Trail, mostly for hikers only, in part for bicyclists too.

Long Trails Planned, or in use in the 4 major proposed wildernesses.

24. Drift Creek Trail, behind Waldport, planned as part of 21 above.

31. Valley of the Giants Trail, access to grove of near champion Douglas Firs.

32. Sutton Creek trail, with a special viewpoint for the handicapped.

I would like to add other trails like those connecting the Tuality plain with Willamette Falls, those trails along the Gorge that bypassed the treacherous rapids, trails along the Nehalem River, the Salmonberry River trail and the traditional crossing routes for the Cascades in Oregon and Washington. But I will leave this entry as un-embellished as possible.

Instead of offering my commentary, I invite you, dear reader, to add your observations! Please comment if you have updates on any of these routes. I also have updated information, but will offer it up elsewhere as we gradually refresh the details of the trails mentioned therein.

Love to spend time getting lost in the deep forests of the Pacific Northwest with Zoe, my Siberian Husky.
View all posts by Jim →
This entry was posted in Coastal Trails, Indian lore, Misc Trails & Trips, Nehalem Valley Trails, Pioneer Lore, Trails. Bookmark the permalink.

15 Responses to 32 Indian and Pioneer Trails in the North Coast range – compiled by R. L. Benson