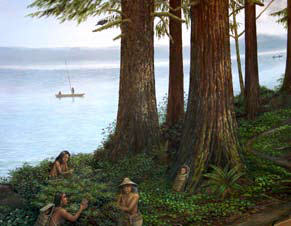 The Indians that inhabited the 1100 square miles of coastal plain and river valleys north of Neakahnie Mountain to the mouth of the Columbia were known as the Clatsop Indians. Their territory with its dense forests of fir, pine, spruce and cedar, as well as fertile coastal plains, provided an abundance of game, berries and edible roots. Its fresh and salty waters, including the Columbia, the myriad streams and lakes, and the vast ocean tidelands–teemed with life including many species of salmon, freshwater fish, and shellfish. At the southern end of their realm, the Necanicum’s 85 square mile watershed’s was an important source of food and nurtured groves of giant firs, spruces and pines. These forests were extremely dense with waist-high salal, kinnikinnik, wapato and camass, interrupted by the occasional meadow and berry thickets.

Early accounts of the native settlements in the region point to a native lodge on the lower Necanicum, not surprising given the volumes of salmon ascending this lively stream. We know of at least fourteen Clatsop villages located along this northernmost strip of the Oregon coast. One of the villages, Quatat, was situated at the mouth of the Necanicum; two other villages, Ne-ah-coxie and Ne-co-tat, were nearby. The Clatsops, like their neighbors the Chinooks who inhabited the north bank of the Columbia, were “Canoe indians” who buried their dead in canoes together with personal effects to tide them over upon their arrival in the next life.

The Clatsops also considered many of the forest animals and the gargantuan storms that lashed their coastal home to be represent active spirits that coexisted with them in this fog-swathed primeval landscape. Like their cousins the Chinook,  they believed that a great wolf spirit Talapus had created salmon to save them from extinction during some primeval near disaster. To honor their wolf deity they observed strict traditions that prohibited them from ever cutting a salmon crosswise. Salmon always had to be cut lengthwise from mouth to tail and the bones had to be returned to the waters for renewal. The consequences for ignoring these customs were dire including burial alive.

The note local ethnographer, James Swan, recounts several creation myths that he heard from the Chinookan residing in the vicinity that relate to these customs. One of them involved an old man who was a giant and an old woman who was an ogress. In the story, when the old man catches a fish and attempts to improperly cut it sideways, the woman cries out that he must cut the fish down the back. The man ignores her pleas and cuts the fish crossways. The fish changes into a giant bird that flies away toward Saddle Mountain on the northern Oregon coast. The man and woman go in search of the bird. One day while picking berries, the woman discovers a thunder-bird’s nest full of eggs. The woman begins to break the eggs, and humans appear out of the broken shells.

Unlike the Calapuyans, the Clatsops were non-nomadic and built permanent low-roofed, partitioned lodges of cedar planks.  Their canoes were also made of cedar logs, hollowed out by fire, then carved and finished with stone or bone tools. Food bowls and utility vessels were made from stone, wood, bone and shell. Mats and baskets for gathering and storage were woven of hide, vine, grass, roots and bark.

One Response to The Clatsop Indians