An old partner – the Raven

The Northwest Indians revered the raven as a powerful, aggressive trickster and credit him with being responsible for the creation of humankind. Powerful shamans interpreted his throaty hoarse croaking, prophesying and conveying the supernatural intent of the Northwest Indian cosmology.

Indeed, our relationship with ravens is said to date back 12,000 years when the First Peoples migrated across the Bering straits. These early travellers, with whom the Holartic Ravens had a symbiotic relationship, were said to have followed man’s migration down into the Pacific Northwest. Unlike our European folklore traditions, the Native Americans did not associate crows or ravens with negative or morbid influences. Instead their relationships were consciously cordial; the Makah Indians in Washington even cultivated “crowberries” to feed to their black feathered allies.

Which is it, a Raven or a crow? 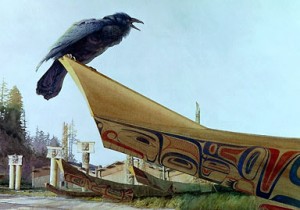 As with the earlier arrival of prehistoric immigrants, the recent arrival of Caucasians from the eastern side of the continent was accompanied by another symbiotic companion, the American Crow (Corvus brachyrhynchos). Both are members of the Corvus genus in the Corvidae family, which also includes the Rook and the Jay. The Common or Holartic Raven (corvus corax) is larger than the crow and is recognizable with his ruffed throat, his ability to engage in more prolonged soaring and his unmistakably guttural croak, rendered as “Hamaxa, hamaxa…” in the Indian legends. The Raven is still commonplace in the Northwest, but the American Crow congregating in noisy groups has become the more pervasive of the two species.

Crows and ravens are known to possess large forebrains that are said to aid them with spatial memory, thus making it easier for them to live in a changing environment. Their eyesight is less binocular and less accurate than human eyesight, but they can detect objects in greater detail – and more quickly than people can. In addition their color perception is more developed and it is possible that they can detect polarized and ultra-violet light.

Ravens lay their eggs in February, usually between 3-7 eggs. They incubate in just over three weeks and between 5-7 weeks thereafter the fledgling are airborne. But unlike crows that have been known to travel more than 1,500 miles, ravens do not migrate but remain in their home territories. Crow colonies have been recorded to exceed 2 million birds, but raven colonies typically range from 50 to 2,000 birds. These large groups of crows are technically referred to as a “murder of crows”. And what is a flock of ravens called? An “unkindness of ravens”!

Current researchers of bird evolution characterize the raven as the largest of all “perching birds” (passerifomes), a bird genus that evolved in response to the development of seed plants and the consequent evolution of seed-eaters, and eaters of seed-eaters. The raven eats seeds, rodents and even nestlings thus making it the most advanced stage in avian evolution – according to some.

But to the Northwest Indians he was both the creator and the Promethean deliverer of light and fire.

Vast were the western forest reaches, wondrous their scented halls and arches, housing a quiet to halt men’s motion – demanding that all be still while it listened: then in the topmost limbs was heard the rushing spirit of the air.

From the North came Tchamsen, the raven, Maker of all the world. That his people should know the sky and the earth, and should see what he had made, Raven sought light. With a glittering throng would he scatter the night, and with broad light character day… (from Stories told in Winter by Douglas Hadley).

In one of the prominent Northwest creation myths, Raven once came upon a giant clamshell inside of which several small creatures were trapped. It was only with Raven’s help that these piteous human beings were released and came to exist upon this earth. 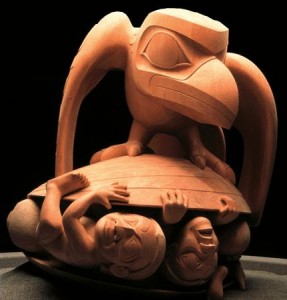 In 1953, while in the Queen Charlotte Islands, Ella E. Clark recorded the following raven story in her book, Indian Legends of the Pacific Northwest:

Long ago, near the beginning of the world, Gray Eagle was the guardian of the Sun, Moon and Stars, of fresh water, and of fire. Gray Eagle hated people so much that he kept these things hidden. People lived in darkness, without fire and without fresh water.

Gray Eagle had a beautiful daughter, and Raven fell in love with her. In the beginning, Raven was a snow-white bird, and as such, he pleased Gray Eagle’s daughter. She invited him to her father’s longhouse.

When Raven saw the Sun, Moon and stars, and fresh water hanging on the sides of Eagle’s lodge, he knew what he should do. He watched for his chance to seize them when no one was looking. He stole all of them, and a brand of fire also, and flew out of the longhouse through the smoke hole. As soon as Raven got outside he hung the Sun up in the sky. It made so much light that he was able to fly far out to an island in the middle of the ocean. When the Sun set, he fastened the Moon up in the sky and hung the stars around in different places. By this new light he kept on flying, carrying with him the fresh water and the brand of fire he had stolen.

He flew back over the land. When he had reached the right place, he dropped all the water he had stolen. It fell to the ground and there became the source of all the fresh-water streams and lakes in the world. Then Raven flew on, holding the brand of fire in his bill. The smoke from the fire blew back over his white feathers and made them black. When his bill began to burn, he had to drop the firebrand. It struck rocks and hid itself within them. That is why, if you strike two stones together, sparks of fire will drop out.

Raven’s feathers never became white again after they were blackened by the smoke from the firebrand. That is why Raven is now a black bird.

3 Responses to Ravens and crows