The Grange movement – the Internet of its day.

The national Grange Movement was founded in 1867, immediately after the conclusion of the Civil War, when the country’s agriculture was in dire shape. Six years later the Oregon State Grange organization was established to help rural communities work more effectively together. Politically, the Granges consistently supported better roads, technological improvements for the small farmer, flood control and rural electrification. But there was another side of the Grange that was just as important! The Granges also encouraged the enlivenment of the local community by throwing great country dances!

It is difficult for many of us to understand the isolation of the remote rural Oregonians that pioneered homesteads in the Coastal Range or in the Nehalem Valley. They rarely got to see their neighbors, who might live 15 to 20 miles away through dense forest inhabited by cougars, feral pigs, and bears. “Visiting” took determination, pluck and stamina and sometimes required an overnight stay. Social life was hard to sustain when the roads were hip deep in mud, the skies were dumping oceans of water, and a foggy dusk presided from dawn to darkness.

The establishment of a Grange Hall was considered quite an accomplishment and a validation of a community’s advancement from “bachelor flats” to the foundation of a new town. In fact there was some considerable rivalry about who was the first Grange in Columbia County between the citizens of Vernonia and those of Yankton. The opening of a local grange was a big deal and was celebrated all along the Lower Columbia. In 1915, when Beaver Homes (sometimes referred to as Redtown) opened its grange “an excursion boat was run down from Portland. On it was a piano, and a full orchestra, horses and hacks to supplement the company’s rigs and a crowd of celebrators bent on dedicating the hall in dancing.”

Most of these country dances went all night long, not simply because they had the stamina to do so, but because an earlier finish would have resulting in people trying to walk home through the dark cougar-infested forests dressed in their best party clothes – so they simply stayed and danced until dawn.

The stairs going up to the dance hall were lined with muddy overshoes, lanterns, and the occasional nosebag full of oats for the horse’s trip home. While the older women sliced up the cakes, the old men hunkered to some serious poker fueled by ample stock of buttons reserved for that purpose. At mid-night there was a break when the ladies served a feast of cooked ham, sliced  with buns, pies, cakes, pickles, and washed down with lots of coffee – all for $1.00 per family! 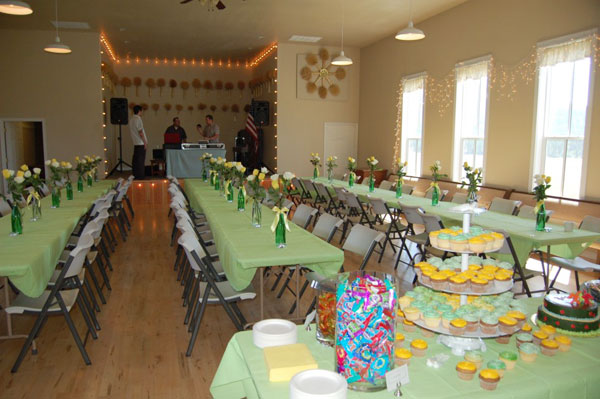 All around the hall, children slept on the chairs and benches, covered in lap-robes and coats. After dinner, they’d put down another layer of wax and announce, “This will be the ladies’ choice.” Out from the kitchen came the matrons, but their old-timer partners had already escaped down the stairs. All the wives and sweethearts would grab hold of their men, while the unattached girls would rush any boys that could actually dance. The others then sought out any uncle or neighbor that could dance a quadrille with a “right and left through”, or “circle eight with a full allemande.” Once the pace picked up and they began a Paul Jones or a feisty tag-waltz the old-timers would reappear just in time to be pulled into the vortex by their patiently waiting wives  and immersed into the exuberantly whirling dancers.

But woe-betide those that tried to drink, for these affairs were entirely sober. And if you got caught, you were not just expelled from the dance, but were also likely to lose your job on the morrow.

Today, the granges still operate under similar circumstances. Pinochle, Bunco and Bingo are prominent on their calendars, and many still hold social events several times a year. One of my favorite annual events is the Strawberry-shortcake Festival put on by the Dixie Mountain Grange every year on Father’s day! Complete with a kaleidoscope of handmade quilts for sale, red gingham table clothes, and the girls tending to the tables – this event reminds us of how we used to live in small and tight-knit communities before the Internet came to our rescue…

Love to spend time getting lost in the deep forests of the Pacific Northwest with Zoe, my Siberian Husky.
View all posts by Jim →
This entry was posted in Indian lore, Lower Columbia Trails, Nehalem Valley Trails, Pioneer Lore, Uncategorized. Bookmark the permalink.

6 Responses to The Grange movement – the Internet of its day.