It takes a forest. Part 1

Occasionally, books come along that change the way we think about the world. Published in 1999, Jared Diamond’s Guns, Germs and Steel was one of those  books. In 2016 it happened again with publication  of The Hidden Life of Trees by Peter Wohlleben. Even before it was translated into English the New York Times had posted a notice that this obscure forestry book was taking the German book market by storm and being anticipated all around the world. 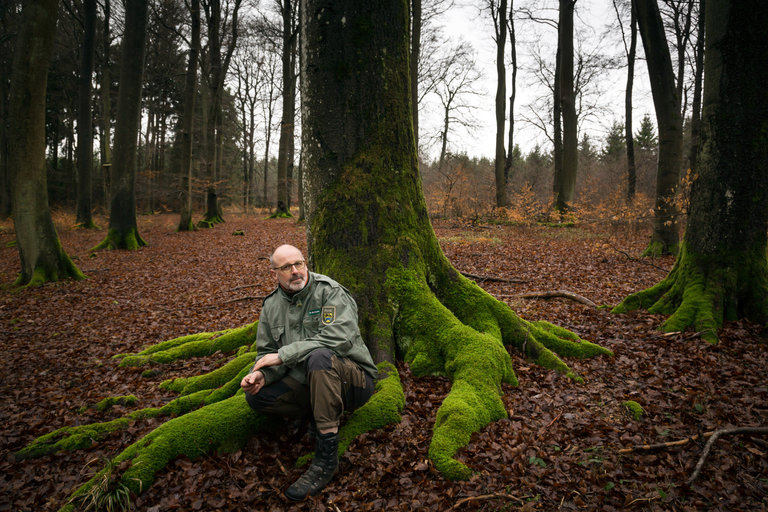 Peter Wohlleben beneath his beeches.

According to the New York Times, “Mr. Wohlleben, 51, is a very tall career forest ranger who, with his ramrod posture and muted green uniform, looks a little like one of the sturdy beeches in the woods he cares for. Yet he is lately something of a sensation as a writer in Germany, a place where the forest has long played an outsize role in the cultural consciousness, in places like fairy tales, 20th-century philosophy, Nazi ideology and the birth of the modern environmental movement.”

Since the publication of his book, it not only topped the German best-seller list, but is now climbing up the US best-seller lists enchanting readers who would normally never consider reading a book about trees. Ever since its release, Mr. Wohlleben has been asking his readers to reconsider the true nature of trees.  They’re more than just a source of building materials. They’re a community of beings that look after each other with all the tenderness and foresight we attribute to mammals.

Are we failing to see the forest for all its trees?

Trees grow without blocking sunlight to their neighbors.

Much of modern forestry has focused on optimizing the production of trees as if they were asparagus that grew in complete isolation from each other. Recently foresters have been shifting their assumptions about forestry from a focus on the individual trees to focusing on the forest as a whole. Scientists are realizing that “most individual trees of the same species growing in the same area are connected to each other.” It also seems increasingly clear that this community of trees  actively collaborates as it goes about safeguarding the resilience of the forest. Wohlleben, speaks from his experience as Germany’s expert forester, assigned to the country’s oldest forests. He reports that these old trees (mostly beeches) develop sturdy branches only on the far edges of their canopies.” They appear to be avoiding direct competition with their neighbors.  Notably, he also reports that younger plantation forests seem incapable of networking with each other to optimize the use of existing sunlight.

It Takes a Forest

“A tree is not a forest,” Wohlleben asserts. They do not live in isolation from each other. Trees, in their collective guise as a forest, have the ability to change their ecosystems by moderating extremes of temperature or turbulence. In this environment trees have been known to live extremely long. But to sustain such a balance the forest must remain intact, no matter what! If the forest can achieve this, Peter Wohlleben predicts that the trees will be happier, more productive and live considerably longer.

One of Wohlleben’s central points is that trees can communicate across the forest in at least three important ways:

Failure to protect the integrity of the forest canopy typically produces holes that permit turbulence to rush in and cause damage. So if we accept the idea that trees collaborate, it’s not surprising that they will concentrate their resources to repair these holes and  restore their protected ecosystem. This community-centric organizing principle contrasts sharply with the Darwinian paradigm. It’s not about the survival of the fittest, but the survival of the community. In stark contrast to “Jungle Law,” trees will seek out the frailest of their kind and nurture them until the weakness has been repaired and the forest ecosystem is restored. Survival results from collaboration, not direct competition. 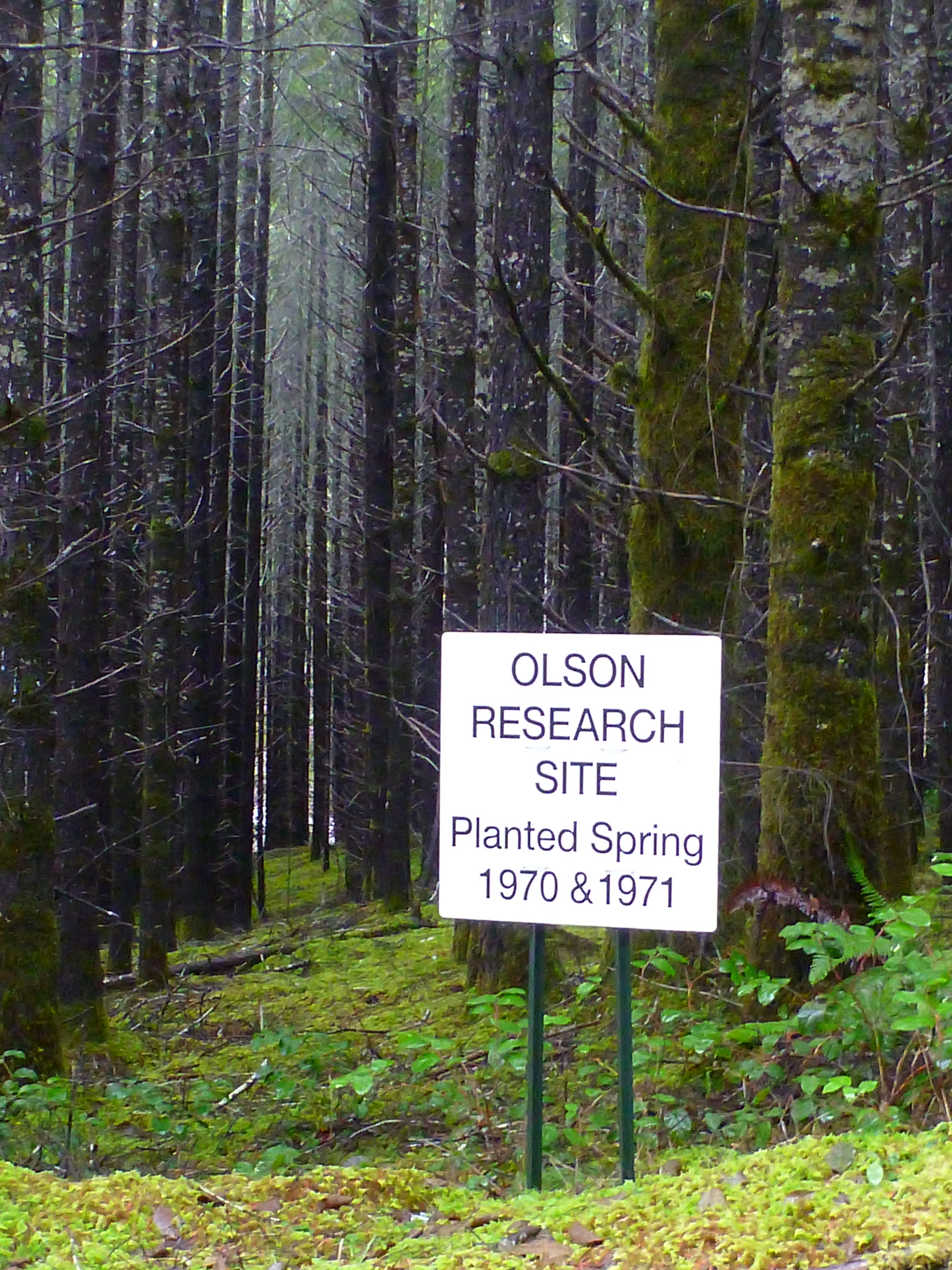 Commercial clear cutting, the way we experience it here, is entirely different than the selective logging approaches used in Germany. Here we strip whole mountainsides, and denude complete watersheds. Afterwards we reseed the clear cuts. But in Peter’s experience these “plantation trees” have no ability to communicate or engage in collaboration. The mycelium under the clear cuts has not regenerated, and the underground network of living roots has been severed. Even the trees’ ability to cast off distinctive scents is useless since the nearest living neighbors may be more than a mile away. To make matters worse, we plant only a single species making the resulting forest vulnerable to environmental catastrophes.

After a clear cut the forest goes silent on all channels. When after 50 years, their replacements begin communicating with each other on the slope, they’re once again chopped down. Measured against the millennial life span of our Pacific Northwest old growth trees, these plantation trees are harvested when they’re still infants.

The Klootchy Spruce down on the Necanicum was said to be 750 years old when it finally succumbed to the elements. Given that longevity 50 years is just 6% of the tree’s natural lifespan. So it’s no wonder that the plantation trees haven’t learned to communicate with the surrounding forest. Measured in terms of human lifespans they would be about 5 years old when they were harvested. It could take generations of trees to rebuild the communications skills Wohlleben observed in the ancient beeches he studied.

If a tree falls in a forest and no one is around to hear it, does it make a sound?

It depends upon who you’re asking?

Wohlleben contents that the trees in the forest are constantly in touch with each other, and they would certainly know if any of them fell down.

To document his assertion that trees are in constant communication with their neighbors he cites the Acacia trees in Africa, which change the chemical composition of the fluids they pump through their canopy when they detect the presence of predators like the giraffes. The acacia trees also release a flush of scent molecules that effectively warn their down wind neighbors. The up-wind neighbors get their slightly slower tip-off to the lurking danger via the root tendrils and the mycelium network. Research at the University of British Columbia has established that these signals are travel at a rate of 3 minutes per inch. At this rate the surviving neighbors 100 feet upwind of the clear cut would learn of their neighbors’ demise about 60 hours after the Husqvarna’s were fired up. Even if they didn’t feel the thundering crash of the big giants, the surrounding forest certainly learned about it very quickly. In fact they may have even “heard” it. Recent studies at the University of Western Australia, have revealed a noisy conversation among the trees at a frequency of 220 Hertz. Perhaps, this is the wavelength which trees use to communicate, like the truckers that communicate across a predesignated CB radio channel. The forest heard the falling tree, and now they’re all abuzz about it.

Perhaps it’s to dramatize the purposefulness of the trees’ actions, or maybe it’s just to engage the readers, but The Hidden Life of Trees does tend to anthropomorphize the forest. Admittedly, this dramatization can be a bit off-putting. But maybe it’s these “humanized” sensibilities that make the book so dramatic and keep us invested in the fate of Peter’s forests. Despite these slightly kitschy embellishments, the book is a “real page turner” delving deep into new research and pulling all the threads together to describe a collective sentience that operates on a time scale that makes their actions almost invisible to us.

Love to spend time getting lost in the deep forests of the Pacific Northwest with Zoe, my Siberian Husky.
View all posts by Jim →
This entry was posted in Books & maps, Logging history, Plant lore, Uncategorized. Bookmark the permalink.