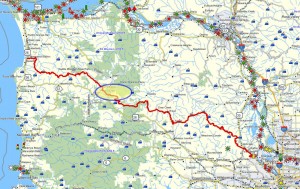 Brief description: This trail is more than half way to the coast and is accessed by a turn off about a mile west of the rest area. This trail is not part of the route designated as the Northern Route. I have included this hike because it is very pretty and a leisurely walk along an isolated logging road. It traces the line of the railroad tracks that used to connect Camp McGregor to Vernonia. It would also make an ideal trail to bicycle.

Travel time to trail head: 90 minutes to pull off on Saddle mountain access road. Does not include additional time to position second car in Seaside. 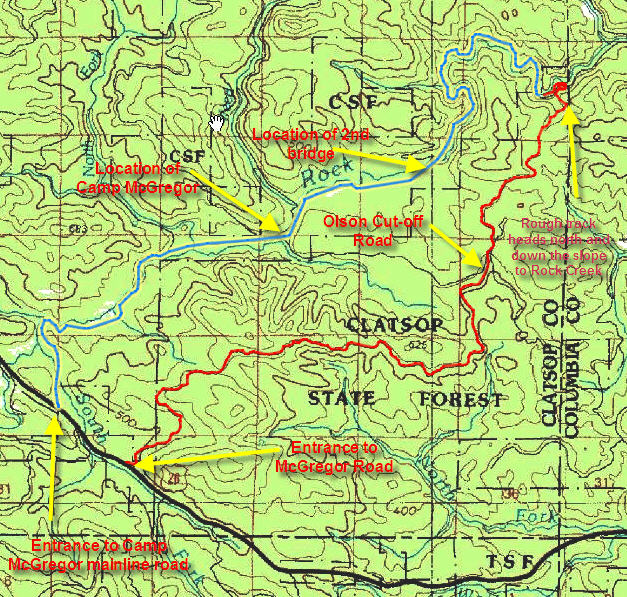 Driving directions to the trail head: From downtown Portland drive west on US 26 for 42.7 miles to the entrance of McGregor Road – a mile or so short of the rest area on US 26. Drive up McGregor Road following the main logging road up to a ridge top and then down into a valley extending Northeast. At 5.9 miles you will pass the Olson Creek Cut-off on your left. Then you will come to an open clearing where two other roads converge. Further along the road turns north and climbs in a northeasterly direction. After 8.05 miles the road dips and then emerges into a clearing. Ahead of you the road splits into the Eastside Grade (left) and the Pit Road (right). But just before you reach this split you drive through a clearing. In the northeastern corner of this clearing a small road slices north through the foliage – passing a flooded quarry. This is the track that leads down to Rock Creek – just under a mile further along. At the bottom of the slope, the road splits. The right hand option continues north alongside Rock Creek, and the left hand option curves back to follow the creek upstream. I usually drive a short distance back along the left hand road and park. Further along there is a rough berm that is challenging for cars with low clearance – so I park before it.

Conditions: graveled logging roads, short distance of washed out area where the road has been reclaimed by the forest and streams.

If you follow the instructions for getting to the back end of the McGregor Road (above) you’ll eventually emerge along the lower portion of Rock Creek. Here the road splits the right hand option heads further down Rock Creek. It is gated about a half mile from the Bridge that crosses Rock Creek to connect with the logging road that descends from Ginger Creek on the north side (accessible from Vernonia and Keasey). If you turn left the road parallels Rock Creek in the upstream direction. Eventually this road also is blocked , just short of the bridge across Rock Creek. But if your car is the more of an urban vehicle with minimal clearance it would be best to park it before the big hump in the road. From there it’s just a matter of following the road over the bridge and following the stream.

There is an uphill option soon after the bridge, but ignore that and hang left to pass through a narrow defile that marks the continuation of the original railroad grade that carried timber out of this valley. Further along the road has been obliterated by earth movement and the encroachment of a stream, but these impediments can be easily navigated on foot.

Ten thousand of the best men that ever wore calks could never have done as we did..The great Tillamook Burn of 1933 has received a lot of attention, but it is often forgotten that during that same year another fire, the Wolf Creek Fire burned a total of 47,000 acres of timber and reduced Camp McGregor to a heap of smoldering ashes. It is thought that the fire broke out in some unburned slashing on the East-side Logging Company property in the late afternoon of August 24th, 1933. Men and equipment were rushed by train from Vernonia to the scene, but a rapid change of wind direction and an increasing velocity of wind soon caused the fire to jump beyond the firefighter’s lines. The wind rising to gale proportions soon whipped the inferno into a frenzy. During the late afternoon of August 26th, the wind suddenly reversed direction and began to blow at near-hurricane strength – directly threatening Camp McGregor itself. The firefighters rallied and initially thought that they could save the community, but the force of the wind and the fire that it drove before it was unstoppable – especially after a fallen tree broke the pipeline that supplied water to the community.

As the authorities realized that saving Camp McGregor was hopeless they ordered the residents and the CCC crews to evacuate by train. But the CCC boys, being mostly from urban eastern locales, panicked and tried to force the families off the train until it was made clear that there was room enough for everyone. Within one hour the entire Camp was engulfed in flames and burned to the ground – the walkways that connected the houses caught fire like a fuse leading the conflagration from one cabin to the next! The fires didn’t burn out until September 5th when the rains finally arrived.
So when the heat of August begins to fry your pelt, and the humidity drops to dangerously dry conditions remember the “hazy August days” of Oregon’s bygone days…