We grow trees for the history books!

Make no mistake this corner of the world is home to the giants, not just Paul Bunyan and his gigantic blue ox, but also several giants that can not just rival our ancient monuments but outshine them in their living grandeur!

For over 750 years a Sitka Spruce had battled torrential storms, weathered fire and pestilence to become the largest Spruce in the US and the World. Growing alongside Klootchie Creek, whose waters flow off the ridge line we are traversing, this giant has grown to the prodigious height of 206 feet tall, and developed a circumference of 56 feet, a diameter of almost 18 feet and a crown that extended 93 feet from the trunk. But sadly the Klootchie Spruce was badly damaged in the storms that wracked the coast in 2007 and had to be cut down. To put

this in perspective Kublai Khan became the ruler of the Mongol Empire at the time that this tree began to reach up into the sky!

But the Klootchie Spruce was not alone as it grew out of the competing canopy to stand towering over the forest and the nurturing Klootchie Creek; nearby a Douglas Fir began reaching heavenward a mere 50 years later – a blink of the eye in a tree’s perspective. And like its neighboring Spruce this Douglas Fir soon outranked its neighbors to seek out the sun as it grew to giant proportions until November 25, 1962. On that date, after having survived untold storms and hurricane velocity winds 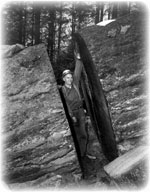 during its estimated 702 years of life the giant crashed to the ground during a blustery Sou’wester.

Its death came only a short time after it was officially designated the world’s largest Douglas Fir. At that time it was 15.

8 feet in diameter at breast height and measured over 200 feet, 6 inches in height. After its demise the Crown Zellerbach foresters discovered that decay had rotted away the interior of the tree, which was a seedling when Marco Polo began his travels. Ultimately the decay consumed the base of the tree to a height of 38 feet before it succeeded in bringing this near-eternal colossus down.