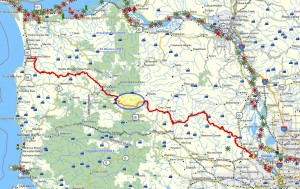 Brief description: This trail segment linking Camp McGregor road to the Military Creek Road is located about half way to the coast on the northern route. It is accessible from the Rock Creek Mainline Road that turns off from US 26 just west of the Sunset Highway Rest Area. 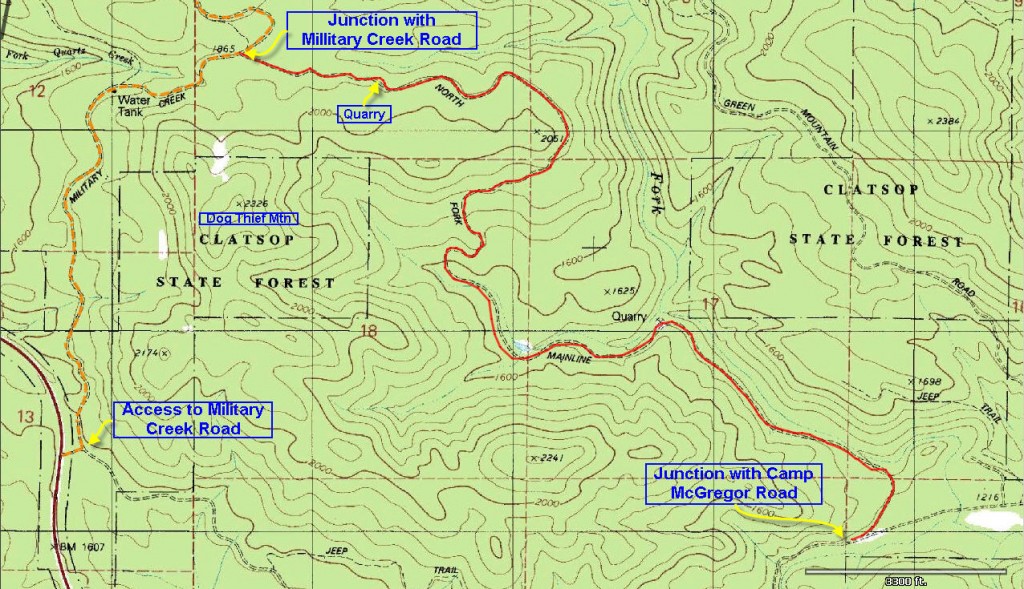 Distance: 4 miles to the junction with the Military Creek Road.

This segment of the “Northern Route” starts at the junction of the Rock Creek Mainline road and the North Fork Mainline road situated about 2.5 miles north of the yellow gate that periodically closes this road to the public trying to enter from US 26.

At the entrance a sign announces the area as the Camp McGregor Tree Farm – owned by Stimson Lumber Company. It is also apparently under the jurisdiction of the North Coast Travel Management area that affects the regulations affecting the hunting of big game – according to the signage. I suspect that the one form of travel not covered by these regulations is bi-pedal, or walking!

From the gate it’s about two and a half miles to the base of the North Fork Mainline road – the first of several that branch off to the left and climb into the Dog Thief Mountain and Green Mountain areas. The Rock Creek Mainline used to be an important arterial for the Oregon-American Lumber Company that conveyed lumber from the heart of the Wolf Creek area down into Vernonia. Camp Olsen, the most remote camp was reserved fro the “bachelors” It was located above the North Fork of the Salmonberry River, just south of what is now US 26. Somewhat closer to Vernonia was Camp McGregor the Oregon-American Lumber Company’s main logging camp, where the married lumber men lived with their wives. Camp McGregor was named after W.H. McGregor; it was constructed in 1922 and abandoned in 1957.

Old timers recall how every morning the #105 Oregon-American steam engine would pull 26 empty log cars up the valley from Vernonia. Just beyond Keasey they would cross “Deadman’s Bridge” and then they’d have to build up enough steam to make it up the grade to Camp McGregor.  Later in the day, engineer Chet Alexander and fireman “Boomer” Reynolds would return hauling the 26 loads of logs down the Rock Creek corridor. After dumping them them into the mill pond in Vernonia, they would overnight in Vernonia and repeat the operation the next day. This continued: five days a week, one trainload a day for 33 years (except during the war when they pulled two trainloads out every day).

The great Tillamook Burn of 1933 has received a lot of attention, but it is often forgotten that during that same year another fire, the Wolf Creek Fire burned a total of 47,000 acres of timber and reduced Camp McGregor to a heap of smoldering ashes. It is thought that the fire broke out in some unburned slashing on the East-side Logging Company property in the late afternoon of August 24th, 1933. Men and equipment were rushed by train from Vernonia to the scene, but a rapid change of wind direction and an increasing velocity of wind soon caused the fire to jump beyond the firefighter’s lines. The wind rising to gale proportions soon whipped the inferno into a frenzy. During the late afternoon of August 26th, the wind suddenly reversed direction and began to blow at near-hurricane strength – directly threatening Cam McGregor itself. The firefighters rallied and initially thought that they could save the community, but the force of the wind and the fire that it drove before it was unstoppable – especially after a fallen snag broke the pipeline that supplied water to the community.

As the authorities realized that saving the Camp was hopeless they ordered the residents and the CCC crews to evacuate by train. But the CCC boys, being mostly from urban eastern locales, panicked and tried to force the families off the train until it was made clear that there was room enough for everyone. Within one hour the entire Camp was engulfed in flames and burned to the ground – the walkways that connected the houses caught fire like a fuse leading the conflagration from one cabin to the next! The fires didn’t burn out until September 5th when the rains finally arrived.

Today, the Camp McGregor road is a bucolic stretch of road, but we will take the first left hand road leading up into the hills, the so-called North Fork Mainline road. This road initially heads in a northerly direction, but it shortly turns west and climbs up a small valley gaining about 263 feet in elevation over the next mile. At the top of this valley the road turns left and crests the shoulder of the mountain at an elevation of 1497 ft.

Over the next mile the trail curves southward and climbs about 100 ft. in elevation – passing a defunct quarry and a small pond. Eventually the road turns westwards and about 2 miles into the hike the road begins to climb again. Over the next 2/3 mile the road ascends the eastern face of Dogthief Mountain, climbing from about 1600 ft. in elevation to over 1940 ft. in elevation. As it reaches the top of this remote peak it turns left (southwards) and begins to traverse the western face of this mountain. Here the route is pretty level, rising and falling a mere 40-50 feet. Finally, when we are about 3.5 miles into the hike the route dips down to meet the military Creek road at an elevation of 1897 ft. In all the hike is about 4 miles long – one way.