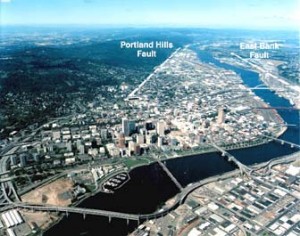 Briefly, the meeting of the Juan de Fuca Plate with the North American plate are what produce the volcanic activity in our area, and give rise to the various fault line that cross-cross the area. I include the following excellent graphics that explain and display the so-called West Hills fault line and the East side fault line – both of which run through Portland.

The most relevant of these fault lines are the West Hills Fault line that runs directly under the Tualatin Hills (Forest Park) and the East Side fault line that is marked by the low bluffs that are visible behind the Swan Island basin. Some geologists believe a fault lies beneath St. Helen’s 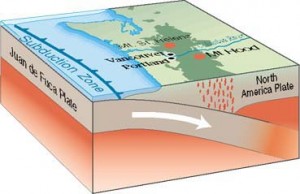 Road and has resulted in the steep, straight, fifteen-mile ridge that lies along the eastern side of Tualatin Mountain.