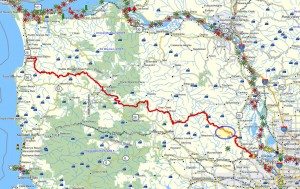 Brief summary: This walk is mostly on private property owned by the Vedanta Society, a Hindu religious organization whose main temple is located on SE 55th Avenue on the western slopes of Mt. Tabor in Portland. The trail is very well marked. Although there are “No trespassing” signs alongside the trail, representatives of the Order have let it be known that people may use the trails as long as they do not harm the shrines and the wonderful forest in which they are located. The Society welcomes visitors that are respectful of their sylvan retreat. It is hard not to be infused with a sense of awe as one follows the little paths through the quickly aging forest. This is truly a remarkable place. 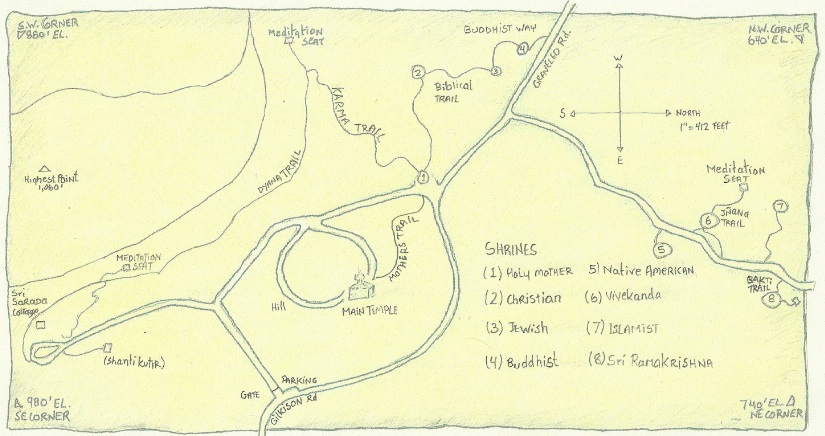 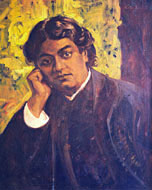 It is unknown, but to a few, that in 1936 the Vedanta Society of Portland purchased 120 acres of newly harvested hillside on the slopes of Dixie Mountain to house their future spiritual retreat. This acquisition is all the more surprising since it occurred during the harshest years of the Great Depression and was organized and financed by a relatively minor chapter of the Hindu church in the US. Officially known as the Vedanta Society, the Hindu presence in the United States had begun only 43 years prior, when the first Hindu representative Swami Vivekananda had toured many of the major cities of North America with the intent to introduce Hindu 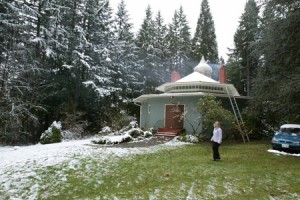 ism to its thriving population. Swami Vivekananda was graciously received by “cultured circles” in many of the major cities from New York to San Francisco, but he never came to Portland. And yet it was here, due to the efforts of a disciple who was familiar with Portland that a chapter of the Ramakrishna Order teachers was founded.

Oregon in those days was not a very “culturally diverse” community and acceptance by the locals was hard to come by. Initial efforts to establish a Hindu center in progressive Lake Oswego failed due to local resistance. Thus, it is even more astonishing that the Hindus found peace and acceptance in a rural community that had only recently begun stringing the wires to bring electric light to its rural citizens.

Despite these odds, the Portland Vedanta Society managed to scrape together the payment and secured a 120-acre property that included a log cabin, a tool hous 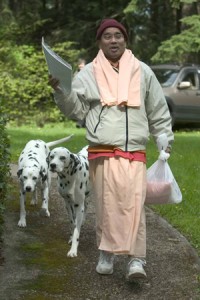 e and a small shed. In 1954 the Society refurbished the original buildings and converted the structure into an octagonal temple topped by a golden dome in a clearing set above the property. This rustic temple became the first Hindu Temple in the Pacific Northwest.

But challenges were afoot. Multnomah County, in its efforts to raise tax receipts objected to granting the Society tax-exempt status for the entire 120-acre tract, and would only grant an exemption for a single acre upon which temple stood. Transcendence not being a particularly practical response to this secular challenge, the Society took umbrage and sued the county! During the contentious proceedings it became ap

parent that the county interpreted the tax exemption as extending from the church building itself, and it seemed possible that the Society might be forced to relinquish the tax exempt status for lands that lay too far away from the temple itself. But, it appeared, the penumbra of tax exemption depended upon whether the facility served a spiritual purpose, no matter how large or small it might be. This revelation gave rise to a novel response. In case the tax collector fail to note the intrinsic spirituality of these hallowed groves, the Vedanta Society began to construct tiny little shrines all across the property, each with its own spiritual umbrella that extended into the forest around 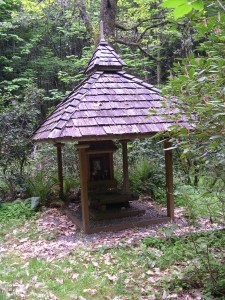 it. In 1974 the first wooden shrines were constructed to the Sri Ramakrishna (the founder of the Order) and the Holy Mother. The following year shrines to commemorate the Buddha, Christ and Ramakrishna’s disciple Swami Vivekananda were added. A Jewish and an Islamic Shrine followed in 1976, and finally in 1977 the Native American Shrine was built on a slope overlooking Sauvie Island and the site of the first known Native American settlement in this area.

While this is private property, the Society allows respectful visitors to enter and wander amongst the shrines. Under the leadership of Swami Shantarupananda, the members of the Society have been repairing the buildings after a period of neglect took a toll upon them. The Native American Shrine was recently rebuilt due to winter storm damage. On one of my many visits to the property I spent several wonderful hours conversing with the Lakota artist that was adding a series of symbols onto the structure. Later I returned to find the structure adorned with symbols of buffaloes and lightning – an iconography indigenous to the plains Indians. But as the Society explained, it was the Lakota that responded to their appeal which is why the symbols of the Plains Indians have come to adorn a shrine located in a region usually associated with the Salmon, the Eagle and the Beaver.

Driving north from Portland on US 30, turn left onto Watson Road immediately upon crossing the county line as one enters Scappoose. Follow Watson until it splits and then take the left hand option which turns into Gilkison. Follow Gilkison Road to its end. On your left is the main gated driveway leading up to the main temple. Straight ahead is a forest road with a chain across it 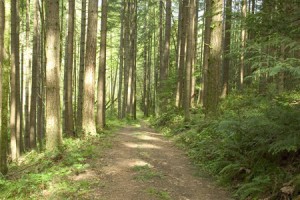 and flanked by “No Trespassing” signs. To your right is a private driveway. Proceed up the chained forest road and past the “No Trespassing signs on your right side. The signs apply to anyone that strays off the road on to the private ground on that side of the road. Asked about permission to enter the Society’s grounds, their members have assured me that the signs are also helpful in encouraging a humble (if not reverent) attitude amongst those that enter, and since there has been few problems with littering or vandalism, the tactic seems to have worked.

Walking up this path, you soon enter into an older forest. These trees were last logged prior to the acquisition of the property, so in 2013 the trees are approximately 80 years old – or nearly twice the commercial cutting cycle. Close examination shows that this area was probably partially logged in the late 1800’s and then again in the ea 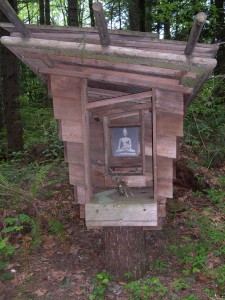 rly 30’s. So the current stand is technical 3rd growth. Of particular note are the giant old stumps that still reveal the slits on the stumps that originally held the “springboards” upon which the loggers stood to wield their two handled saws – often called “misery whips” in the lumberjack jargon of that day. Usually it would take them all day to cut a single tree.

As you enter the forest you will note Baneberry, and False Solomon’s Seal, amongst the large bunches of Sword Ferns and Oregon Grape. On the floor of the road you can find lots of Wild Ginger and carpets of shamrock-like Wood Sorrel, locally referred to as Oregon Oxalis. In the bogs visible on the forest floor below the road, are skunk cabbage and Camas lilies – a favorite staple of the local Indians in days gone by.

A profusion of mushrooms, both edible and not, can be spotted as you traverse the property: Deer Mushrooms, Honey Mushrooms, Chanterelles, Boletus Edulis, various types of Amanita mushrooms, and also the prized the Lobster Mushroom. I have also spotted the following non-edible mushrooms in this area: the Clitocybe Inversa, of the most common “fairy-ring “ mushrooms found in the Northwest. Also present is the Turnip-bulbed Inocybe, the Common Paxillus and the Dark Centered Hebeloma. Another striking, but inedible mushroom 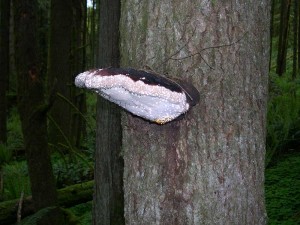 that you may encounter in these woods is the bracket fungus, Fomes Pinicula. Bracket fungus attack the tree’s heart wood producing a soft, spongy decay at the tree’s core.

One tenth of a mile up this road one arrives at a three-way intersection. Proceed northwards by taking the right hand track. We will cross this intersection again upon our return. Another tenth of a mile and you’ve reached an intersection marked with a small sign indicating various shrines to the right. Turn right and follow this road .2 miles; there you will arrive at the Native American Shrine. Approaching this shrine from above all you can see is the back of the eagle’s wings. A short trail leads down to where you can duck under the wing and emerge in front of t

he shrine. Of all the shrines the Native American Shrine stands out as the most remarkable of these unique wooden edifices. 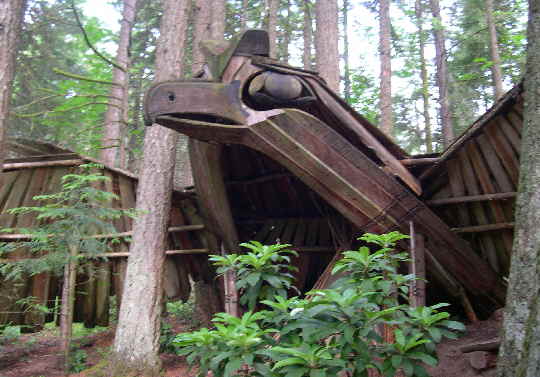 Built to resemble a gigantic crouched eagle, the shrine spans almost 50 feet from wing tip to wing tip. Built into a stand of Douglas Firs and rising 30 feet into the air, the Haida style eagle’s head looms over the structure keeping a watchful eye on Sauvie Island, the ancient home of the Indians on the Lower Columbia River.

For many years a Lakota shaman, named Brave Buffalo, consecrated the Shrine annually. Traveling from Easter Oregon he would come to reassert the presence of the Native American spirit in a world almost bereft of native content. One comes away from this unique shrine both awed by the quiet majesty of the forests surrounding the temple, but also cowed by the spiritual intensity emanating from the eternal vigilance of the eagle’s penetrating eyes. It is an awesome and magical place.

After visiting this shrine it’s time to make the complete circuit of the shrines. Return up to the forest track above the Native American Shrine and turn right to continue on down the trail. There you will encounter three more shrines, including the towering shrine to Sri Vivekananda, the Islamic Shrine and the shrine dedicated to Swami Ramakrishna. The road continues onwards, but we will return walking back up the road we just descended. 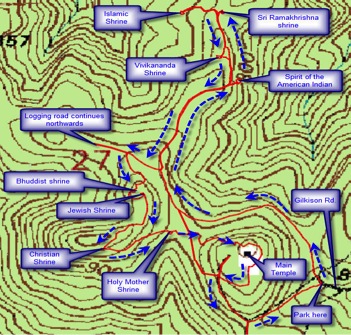 Walk back up the trail, past the Native American Shrine until you reach the intersection with the main forest track. Now take the other branch (turn right) that leads westwards and in a few steps you will encounter a sign and associated trail branching off on the left side of the road. This lovely little path winds its way along a low wooded ridge line passing 4 further shrines along the way. Eventually it will pass the earliest shrine built to commemorate the Holy Mother. Immediately thereafter the path will debauch on to the intersection that we first passed on entering this private forest. Immediately across the road, you will see a sign for “Mother’s Trail” that leads from the Holy Mother Shrine to the main temple at the top of the hill. Climb this short track and you will arrive at the main temple itself. Originally it had a beautiful view of Sauvie Island and the mountains beyond, but the forest has since reclaimed much of this view. At the temple, take care to avoid disturbing the Society members since they may be participating in “retreat” activities. Walk around the temple and on the far side of the knoll beyond the temple you will encounter a small forest road (not the graveled driveway). Follow this moss-covered pathway down to the entry road and turning left follow it down to an intersection. Turn left again to return to Gilkison Road. The other road leads up to the caretaker’s cabin.

This is an entirely magical hike and one of my favorites – and it never fails to impress those that I have brought to view the unique shrines hidden in the forest. Enjoy this loop and I hope you, too feel a sense of reverence, regardless of your religious persuasion.