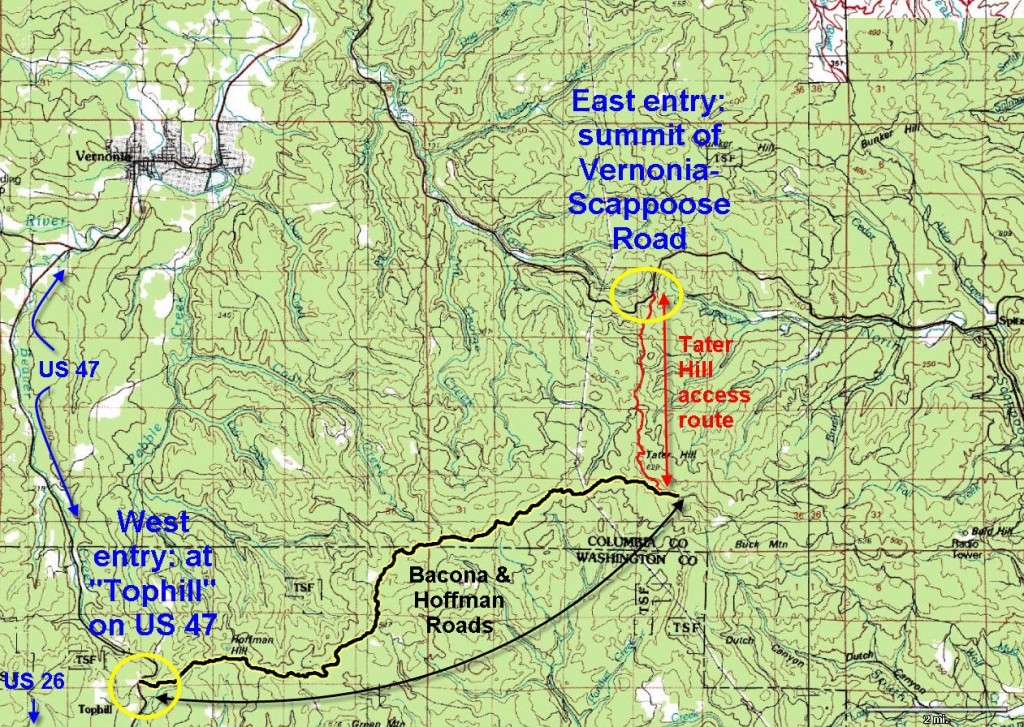 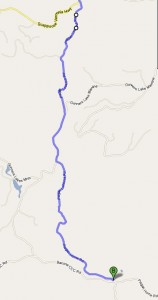 I-405 towards St. Helens for 20.5 miles. Turn left at the Vernonia to Scappoose highway and follow that road for 11.5 miles (or until you get to the summit). Turn left off the road and follow the dirt road (Pisgah Home Road) south for 1.8 miles. At that point look for a road that splits off to your left and heads uphill – that’s the Pisgah Lookout Road which you will follow for another 1.8 miles. These roads are narrow and potholed – not recommended for street vehicles in rainy muddy conditions. On your way you will pass close to the summit of Tater Hill – an ignominious name for a hill, in my 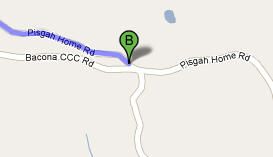 opinion. After 1.8 miles you will emerge into a clearing with a 4 -way intersection (see inset map). Park your car here to start the full hike, or turn right and follow the Bacona CCC road to any point along the way you wish to start your hike – or drive all the way through to Tophill, if you so desire.

Elevation change: The intersection of the Bacona CCC road and Pisgah Home Road is at an elevation of 1913 feet. From there the road drops to 1675 ft as it passes by a shallow pond before climbing the flank of Long Mountain. 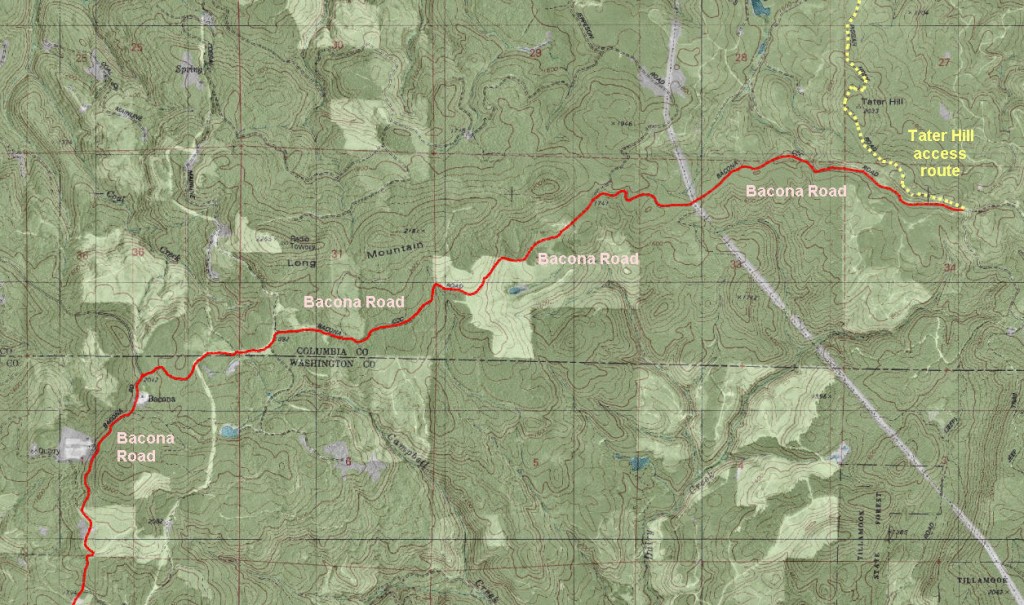 About 3 miles from the start the road levels out at about 1900 ft as it heads west. At 4.77 miles from the start you pass by the last remaining house in Bacona at an altitude of about 2o50 feet. Shortly thereafter the roads rises to 2095 before dropping down the slope to an elevation of 1754. At 7.6 miles you reach the intersection with the Buxton Road (elevation: 2064 feet). A half mile later you pass the intersection where the Bacona Road leads down towards Buxton (elevation: 1847 feet), and the continuation along the ridge top is actually Lawrence Road. We follow Lawrence road for about a third of a mile. There, at abut 1850 feet Lawrence Rd. drops over the ridge line and heads towards Vernonia. We will instead take the left hand option and descend Hoffman Mountain for 1.75 miles using Hoffman road. We emerge on Highway 47 at the top of the hill, in the hamlet of Tophill. 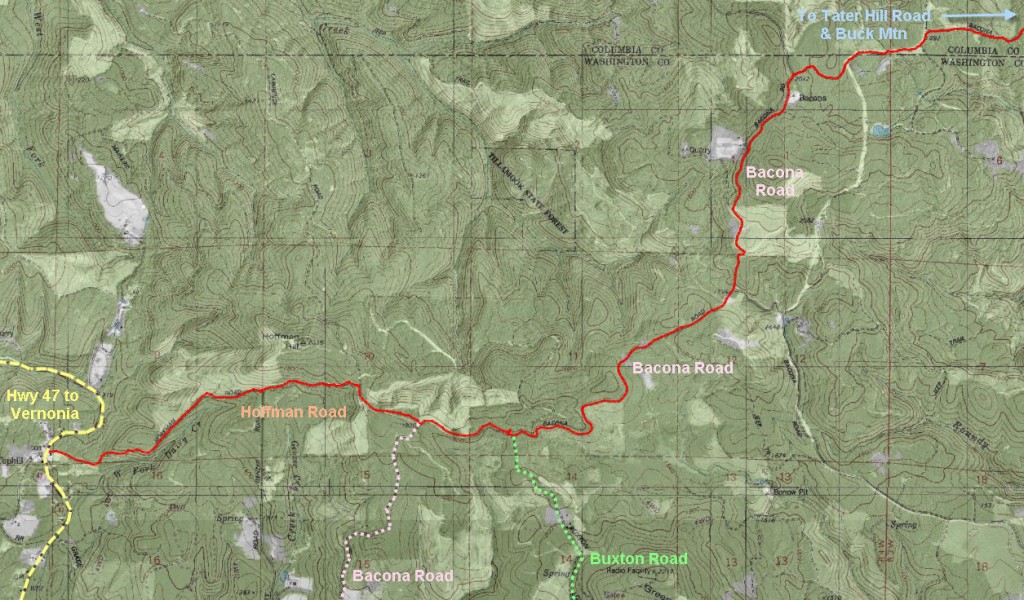 Brief summary: This route is an essential lynch-pin in the extended route from Forest Park to the Coast. The Bacona CCC road is the southernmost route that allows us to circumvent the private land holdings in the northern Washington County area. Since it is quite long I recommend using two cars, or bicycles. In the latter case, you may wish to ride from Tophill down US 47 to the trestle bridge (towards Vernonia). About 500 yards beyond the old trestle bridge you will find the entrance to the Banks-Vernonia trail. Follow that trail to Vernonia. If that’s not enough consider climbing to the summit of the Vernonia-Scappoose Road (see description of the Crown Zellerbach road) and from there back up the Pisgah Home road and Pisgah Lookout Road to where you parked the car. 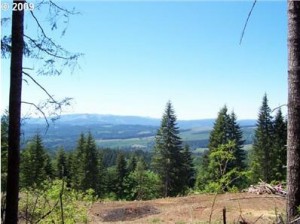 Trail Log: The road is reasonably well maintained and does have occasional traffic, though I would be surprised if you see more than a couple of cars. The lowest part of the road (as it passes a small pond) is the roughest with large rocks comprising the base of the roadbed. Otherwise the conditions are good, even in poor weather. In winter it can snow at these elevations, so be sure not to get stuck in the snow.

Most of the route follows a plateau that runs along the shoulders of Long Mountain and Hoffman Mountain. To the south are great views of the western reaches of Washington county. This was once a thriving corner of the Calapuya Indians domain. 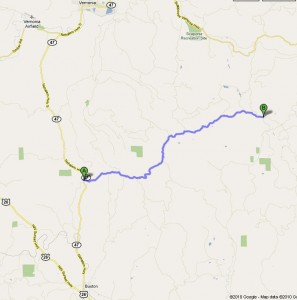 Bacona was first settled in the late 1870’s by four homesteading families from Denmark: the Nelsons, the Jeppesens, Hoffman’s and Petersens. The Hoffman’s operated a sawmill that employed 8 people to produce railroad ties. Apparently in the early 1900’s at least 20 farms were located in the Bacona area raising cattle, hay, and potatoes. Due to the  altitude (2012 feet) agriculture was not a reliable way to survive. Nonetheless, the original families were able to feed themselves and maintained orchards of prunes, apples and cherries. They also grew their own vegetables and stored them in their cellars, but there was not enough to make these farms commercially viable. 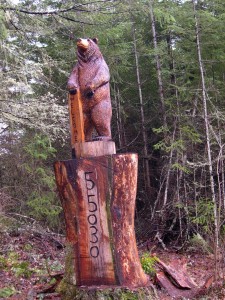 Often the residents had a rough go of it getting through the winter months. One of the families, the Wellers, were said to have only $15 per month to feed nine people three times a day!For breakfast they had oatmeal and cooked dried prunes – or a half-gallon of canned loganberries – sugar syrup and hard biscuits made mostly from flour, water, and baking powder. For dinner they ate more biscuits, onions and potatoes – fried together.

A mailbox on Pebble Creek Road – that should keep the solicitors away!

The original road from Bacona to Buxton exceeded a 20-percent grade along many sections. The road was so steep and rough that members of the Bacona community petitioned Washington County to improve the road. In winter the community was accessible only by sleigh. When a member of the community died a coffin was brought up the mountain, but not without mishap. The sleigh tipped over and the coffin slide 30 feet into a deep ravine. It was eventually retrieved and the body was taken down the hill, but this time the whole affair was synced in tightly. Around 1910 a school was built on the Nelson family homestead two miles south of  the town. The original count of students was 11, by 1913 it had risen to 26. After 1913 the population of the students declined steadily. The original teacher had a salary of $60 month when the school first officially opened in 1915. She later returned to Bacona and married one of the Jeppesen boys; she was an octogenarian in the late seventies when she recalled her early days of teaching.