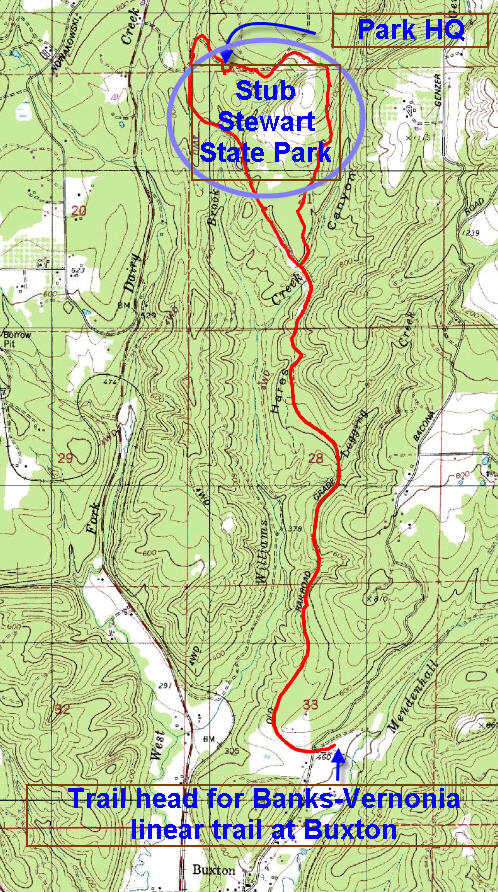 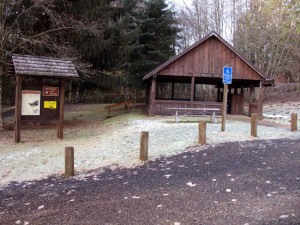 From the Sylvan Interchange on US 26 travel west on the Sunset Highway (US 26)  for 25.5 miles. The right turn on to NW Fisher Road is right after the Apple Valley airfield with the big log cabin home and usually a helicopter siting out front. NW Fisher round heads north (.7 miles) and as it emerges from the small cluster of building that comprise the once bustling village of Buxton the road bends slightly to the right becoming the Bacona Road. Proceed along the Bacona road for another .6 miles and turn right into a trail head area with gravel parking and an old railroad shed. From there you walk a dozen yards south to regain the rail road bed as it proceeds northwards.

Between Manning and Buxton the trail uses the existing railroad grade and Pongratz Road to link the Manning trail head to the Bacona Rd trail head. Unless you’re insistent upon walking the “entire” length of the linear trail, I would go ahead and skip this 3 mile interlude. 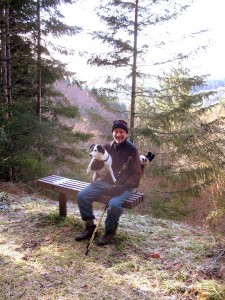 George Converse and his dog

Brief summary: This 15 miles loop runs from Buxton up and around the Stub Stewart State Park, before returning to the trail head in Buxton. The paved trail is a very gradual climb rising 634 feet over the 7.5 miles to the Stub Stewart Park administrative lodge.  Much of the way the trail parallels Highway 47 as it traverses the slope of the valley and ultimately leads over the top of these foothills that extend from Scappoose to US 26. The well maintained and paved route passes through a thickly forested hillside and along tall railroad embankments that cross the frequent ravines. As it approaches the Stub Stewart State Park the track emerges onto the access road leading up to the park. Here we diverge from the  railroad grade and proceed up past the lodge and follow as the roads ascends, curving to the left. As the road curves left notice the walking track that parallel the road on the right. 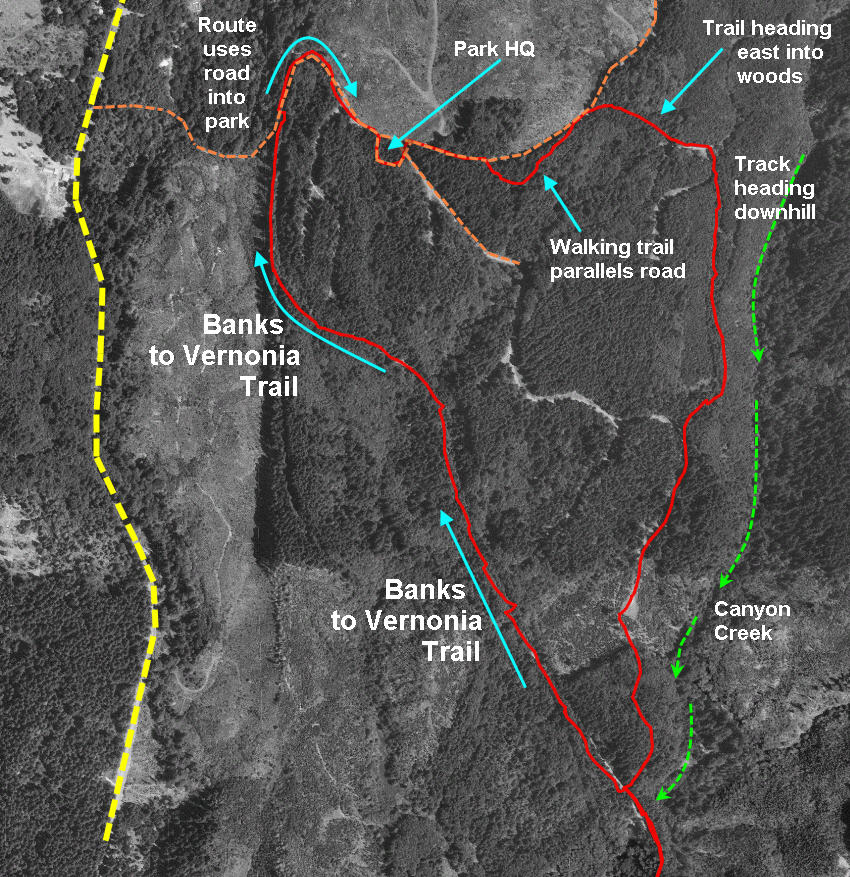 Leave the paved roadway and follow the dirt track which will soon turn rightwards (East)  and then bend further right heading south and downhill. If you follow this track it will lead you back to the paved route that leads back to Buxton. The return route is the same paved that brought us up the hill.

Trail Background: The  Bacona Road entrance to this trail is one of the best documented and most informative trail heads in the area. But that said, it is also one of the most scary! Aside from the picturesque little train depot, bright yellow signs proclaim that cougars have 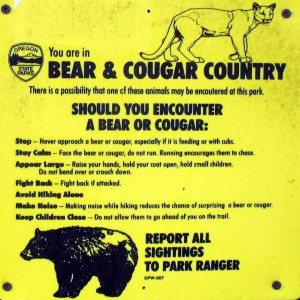 been sighted in the vicinity and it advised what to do – no, DON’T run! This trail head is actually quite close the the beginning of the unfettered wilderness that constitutes the Coast Range and so it is not unlikely that cougars and bears have made their way through the area. But mostly, these creatures are more scared of us than we of them and the typical result of an encounter is the rapid exit of the four-footed participant. In the case of the cougar, it is unlikely you will ever see them or know that they were ever in the vicinity. Bears on the other hand can 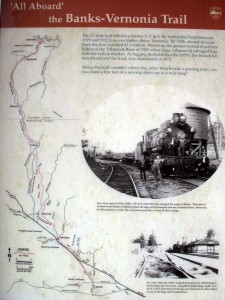 be a bit hard of hearing especially when they’re ensconced in a delicious salmonberry or blackberry bush – I tend to be a bit hard to distract at those times as well. So it is not uncommon to round a corner and encounter a feasting bear. The bear will usually decamp before you’ve realized that the “big black dog” you’ve interrupted is actually none other than a bear. If the bear happens to have cubs, then they may be more defensive. In those cases, just back up slowly while extending your arms upward to increase your “size” and make sure your dogs are retreating as well. In my infrequent encounters with bears, I  have usually wanted to apologize for my rude interruption of their berry feasts, but they never stayed around long enough to appreciate my remorse…

Bears and cougars are no recent visitors to this region. As early as 1873 when the Astoria-Salem Military Road was being constructed, the records mention a “scarey camp” near Buxton where tremendous storms and panthers kept the surveyors awake all night long. 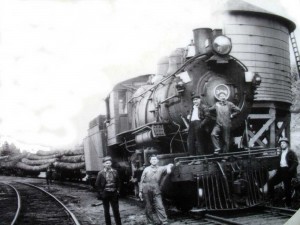 Engine 356 stopping for water at Braun

The railroad line upon which this 21 mile trail has been reconstructed was originally built between 1919 and 1922 and designated the S.P & S. Ry branch line. It was used to haul timber from distant encampments such as Keasey (northwest of Vernonia), Enright and Cochran (on the Salmonberry) and loading points along the Wilson River deep in the Tillamook forest. For almost 40 years as much as $1 million dollars of timber were extracted each year from these woods to be dumped dumped into the Columbia and eventually exported to the burgeoning markets in San Francisco. The peak volumes occurred immediately after the Tillamook Burn in 1933. By the 50’s the forests had been completely plundered and/or burned and the line was closed in 1973. I wonder how they felt as they hauled off the last load of logs in the late 50’s – like the infamous loggers that cut down the last of the Easter island’s trees?

4 Responses to 02: Buxton to Stub Stewart