In some places March may “go out like a lamb”, but not here. 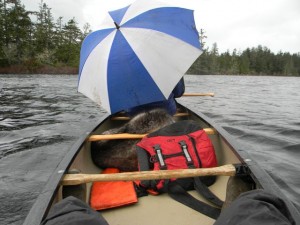 In some regions, March is said to “come in like a lion and go out like a lamb”, but here in the Pacific Northwest that’s hardly accurate as this early spring excursion to the Washington Coast demonstrated!

But if you wait for the weather to be clement, you’ll never get out. So that’s why James Benson and I planned a trip to explore Island Lake on the Long Beach Peninsula on March 24th – come hell or high water. We knew that it might be either or even both of these options, so I’m very glad we didn’t have any high water, especially in the form of a Tsunami, because the Long Beach Peninsula would be an absolute death trap in such a disaster. 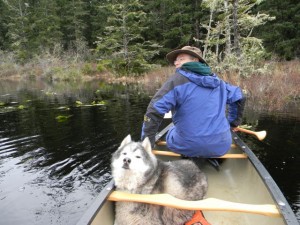 As for the more benevolent versions of precipitation, we managed to find a relatively dry spell for our exploration of Island Lake – one of the long finger lakes that extends up the center of the long peninsula. I was particularly interested in visiting this lake since the Columbia Land Trust, on whose board I sit, had recently acquired a large tract of land between Island Lake and Loomis Lake – just a skip and a muddy splash further west.

To reach Island Lake travel down to the Southwest corner of Washington State and then drive up the long isolated peninsula, known as Long Beach, Washington route 103. Turn right onto the east-west oriented arterial, Cranberry Lane. About a half mile onwards, turn north (left) on to Birch Road and follow it until you reach a chained off barrier – to your right the road turns and circles around at the waters edge forming a nice put-in point for any small craft. The Columbia Land Trust does ask that you notify them if you plan to use the lake, but it looks as if this hidden interior lake gets occasional from the local inhabitants.

The Long Beach Peninsula and Willapa Bay were originally discovered on July 5, 1788 by lieutenant John Meares in East India company ship, the Felice. Having failed to identify the mouth of the Columbia River, Meares sailed north. Meares sailed north where he discovered the entrance to what was later called Shoalwater Bay. He sent his long boat into the mouth of the bay, anticipating that the entrance to the bay was full of dangerous shoals and swept by strong currents. But the unanticipated danger proved to be the Indians that promptly attacked the long boat as it tried to enter the bay. Meares abandoned the effort and sailed north to continue searching for the great fabled western river called the San Roque by the Spanish explorer Heceta, and later named the Columbia.

In 1851 white settlers entered the area and discovered the oysters. The following year James G. Swan arrived and began to describe life on Shoalwater Bay in his classic account of life on the western frontier, now published under the title, The Northwest Coast. In it he describes the peninsula as a “flat, marshy and sandy plain, elevated but a few feet from the water’s level, and covered, as is the whole region around the bay, with a dense growth of gigantic forest trees, principally spruce fir and cedar“. His accounts of life among the Indians on Shoalwater Bay are among the best descriptions of Northwest Indian culture to be found, with intelligent observations interspersed by touching stories that bring these early settlers and their indigenous neighbors to life in a way seldom seen in the dry accounts of those days.

One particular passage comes to mind in which Swan is relating the Indian approach to paddling their canoes, the ubiquitous means of transportation in this semi-aquatic landscape. 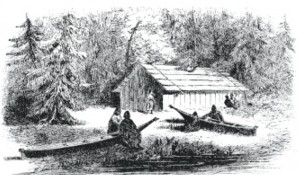 “We could have reached home easily, but as there was no occasion for haste I preferred to travel just as the Indians were used to going, without hurrying them up continually, which only vexes them to no purpose… When in the canoe, all hands will paddle vehemently and one would suppose that the journey would be speedily accomplished, the canoe seeming almost to fly. This speed will be kept up for about 100 rods, when they cease paddling and all begin talking. Perhaps one has espied something, which he has to describe while the others listen; or someone thinks of some funny anecdote or occurrence that has transpired among the Indians they have been visiting that has to be related; or they are passing some remarkable tree or cliff or stone which has a legend attached to it and which the old folks never can pass without relating to the young, who all give the most respectful attention.When the tale is over, the steersman gives the word “Que-nuk, que-nuk, whid-tuck” (now, now hurry) when all again paddle away with desperate energy for a few minutes, and then the same scene is enacted again.

Our canoe trip was lovely – paddling through the quite of a blustery March afternoon, arousing the occasional Mallards and Canada Geese, but otherwise gliding unobtrusively through the dark brackish waters of this tidewater pond. The wind can be quite a force this close to the ocean, but that day it was not at its fiercest so we were spared the anguish of sore shoulders afterwards. The woods around this area are full of wildlife including a large population of black bears. One of our naturalist took the attached picture of a LARGE black bear he encountered on this property. Note the surprised  look in the bear’s eyes – that was pretty Close! 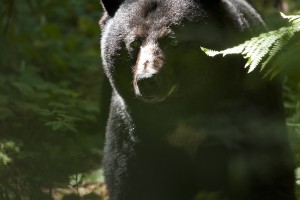 paths to Loomis Lake and we discovered that, aside from the Loomis Lake State Park entrance, which was closed – it was also possible to approach the lake from 206th avenue that dead ends at the water’s edge. We decided to save that excursion for another day…

Love to spend time getting lost in the deep forests of the Pacific Northwest with Zoe, my Siberian Husky.
View all posts by Jim →
This entry was posted in Coastal Trails, Misc Trails & Trips, Pioneer Lore. Bookmark the permalink.

3 Responses to In some places March may “go out like a lamb”, but not here.