Spring is here; the Trilliums have arrived! 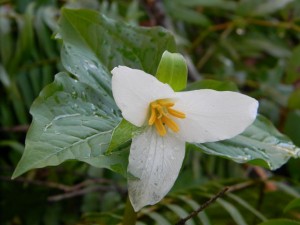 This iconic flower is frequently all that heralds our Pacific Northwest spring, since the common characteristics of this vernal season, like warming weather and diminishing rain are so often missing in our chilly jungle.

March 8th dawned clear and sunny which was all I needed to clear my calendar and scramble up into the woods to witness the first buddings of greenery, the steam wafting up from the warming soil, and the excited songs of the birds harvesting the soft soil for the emerging insect life – which brings me back to the flowering trilliums punctuating the dark forest floor with their white and yellow accents.

The trillium’s yellow stamen is covered with a gummy matter that clutches the plant’s precious seeds. But forest ants are known to adore this small, white structure joined to the seed called an “elaiosome,”. This structure is rich in oil and emits a chemical that attracts ants. After the ants eat this trillium treacle, the seeds that have stuck to them are discarded in their tunnels where they later germinate. So now I begin to 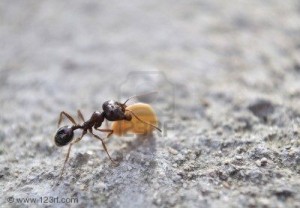 understand that when Loki leaps back into the car entirely covered with springtime mud, we are merely bit-players in a universal plot to shuffle millions of biological pawns across our endless chess game.  If this were ever to stop we’d be at the end of our existence, so appreciate the life preserving message behind the seed covered in stickiness and and your mud encrusted pooch.

The trillium has always been a favorite of Indians and settlers alike. I was discouraged from picking it by the apocryphal tale that severing its stem would so discourage it, that it wouldn’t return for another 7 years. But the Quinault Indians had a more effective precautionary tale for their blossom snatching children. Pick a trillium and you were guaranteed to make it rain – a pretty safe bet for residents of the lower Columbia River in early April. 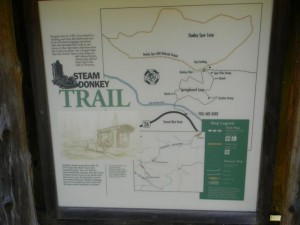 On this early spring day I set out to walk the final two trails on US 26 between Portland and the coast. Of course, I have been traipsing all across these hills and mountains for the last 5 years, but somehow I saved the only two “established” trails for the bitter end. And today I decided to explore these official Tillamook State Forest trails: 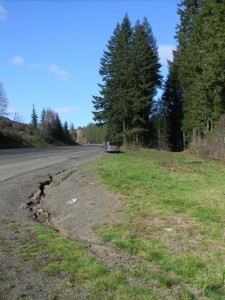 The Four County Point trail is located about 39 miles out of Portland. A highway sign gives ample warning that there is a hiking trail ahead, and just as the road turns and begins to ascend you will spot an additional sign alongside the road, where a wide should accommodates parking for at least a dozen cars.

The official brochure from the Tillamook State Forest claims that this is the only place in Oregon where you can stand simultaneously in four separate counties: Tillamook, Clatsop, Columbia and Washington counties. My reaction to that is “big effing deal!” There’s so much more to this nifty 1 mile trail than contemplating some virtual dot on a map. But if that’s what it takes to get you out of your car and into the woods this trail may be the catalyst to helping you get a new life and a healthier perspective beyond the contemplation of political lines in the sand. 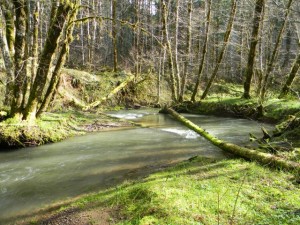 The trail itself winds through a Douglas-fir forest mixed with Vine maple, Salal, Oregon grape and Sword ferns. The North Fork of Wolf Creek runs alongside providing beautiful stream-side vistas. Follow the trail down and around before heading uphill parallel to the road. You eventually connect with an access road, but the trail diverges from this road at the top of the next hillock. The trail is relatively flat and well maintained so it can be navigated by most people without undue burden. On the way back you can stay on the access road which leads up the slope to the road, bypassing the lower portion of the trail. 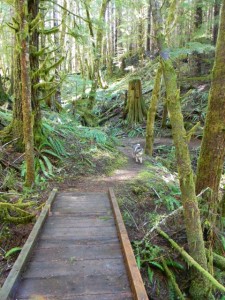 This is a nice hike to take visitors on. It will add an hour to your day-long beach excursion, but will give them a lovely impression of our deep forests – something at least as dramatic to appreciate as our lovely coastline.

For another short hike, the Steam Donkey Hike at the Sunset Rest Area is equally recommendable. Configured like a figure 8, these two short trails comprise an interpretative trail that attempt to give you some idea of what it was like to log these hills in the early 20th century. As an “interpretive trail”, I think the concept fails to connect. But as a walking trail that shows off the huge stumps of yesteryear and the charm of our deeply shaded forests,  the Springboard trail (.3 miles) and the upper Dooley Spur Loop Trail (.5 miles) easily succeed. 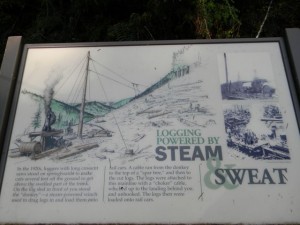 Both trails are well maintained and there is a nice bench near the interpretive sign at the midpoint of the figure 8 – where the two trails join. The signage does give a good description of the logging rigging that was used, but it’s unfortunate that they could not leave an actual old steam donkey in situ to help bring this early logging technology to life. 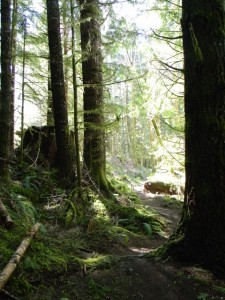 The fact that the hills all around have now been obscured by the new growth which makes it more difficult to envision the scale of the operation when it was operating in the 1920’s.

But the walk is certainly to be recommended. I’ve driven by this rest area for years and have never stopped to consider this little trail. Now I will cheerfully recommend it as a very worthwhile diversion for the 20-30 minutes it takes to circumnavigate the two trails!

Love to spend time getting lost in the deep forests of the Pacific Northwest with Zoe, my Siberian Husky.
View all posts by Jim →
This entry was posted in Indian lore, Plant lore, Saddle Mountain Trails. Bookmark the permalink.